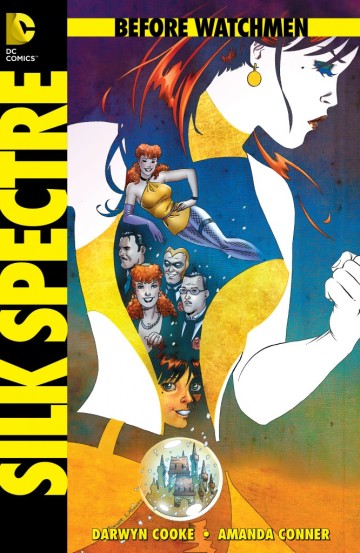 So they’re doing some Watchmen prequels.  Seven of them in fact, starting in Summer 2012.  Now, we all knew this was coming… this was the worst kept secret in comics.  We even knew a bunch of the creative teams.  But now it’s officially here and we can talk about it like it a real thing.

First off, and this is a completely random and not at all deep point, you do a prequel to the most famous graphic novel of ALL time and the best name you can come up with is Before Watchmen?  That’s just super boring.  You should have done some more brainstorming on that one, DC.

Second, I don’t like this.  I mean, I’m not going to cry to the heavens for Glycon to come and rain vengeance upon the folks at DC.  I’m not angry about it.  It just seems entirely uncalled for, and I’m sort disappointed in DC and, if I’m being totally honest, in the creators too.

These aren’t stories that need to be told.  The Watchmen prequels were IN Watchmen.  I’ve read the book a million times… I know what happened to everyone before the main story because it’s in there.  I really don’t need to know anything more about Rorshach or Nite Owl or anyone else.  I’ve got a rather well-rounded sense of them as characters.  I don’t know how much of the new series are going to be rehashes that expand on things already shown in the original, but I know the important bits of each character’s story.  I don’t need four issues of Dr. Osterman doing fun physics work or whatever they’re going to do.  The relevant bits of all of their stories have been told.  The idea of Watchmen prequels is just dumb.

I understand why Alan Moore is irked about it, though I’m not against the prequels on his behalf.  Alan Moore is amazing and pretty much the best comic book writer of all time so maybe we shouldn’t be doing shitty things with his awesome books all the damn time, but he doesn’t own Watchmen nor did he originate the characters.  They’re Charlton characters that he repurposed… none of them are his original creation.  Plus Moore’s done stories with tons of other creators’ characters, and these creators have gotten screwed over way worse than he has.  I mean, Moore’s written Superman… Siegel and Shuster had it FAR worse than Moore ever did.  Other people getting to play with the cool stuff you build is what happens when you do work for hire at a major publisher.

But what most bothers me about Before Watchmen is that it’s so obviously a money grab.  Yeah, I know all us nerds are freaking out on Twitter and forums and such, but they’re going to sell like hotcakes.  I think it’s a completely ridiculous idea, but I’ll probably still check out a couple of them.  The sales are going to be HUGE.  And then huger still when they’re released as collections.  Which on the one hand is smart… companies need to make money.  But on the other hand, is it the right kind of money?

Here’s what I mean: Lots of cities and states have been facing some harsh budget shortfalls lately during the recession, so they’ve started selling stuff.  Parks, building, parking meters… they’re cleaning everything out to balance the budget for THIS year.  In a lot of cases, they’re trading long term guaranteed income for a short term windfall (like with parking meters).  The result is that the budget will work out this year, but then next year you’ve got the same problems and nothing left to sell.

I feel like DC is doing the same thing.  They’re going after a short term money grab instead of a long term investment.  Before Watchmen is a limited bunch of series.  They’ll sell well as single issues and as trades, but it’ll peter off pretty quick after that.  There are a lot of good creators on the books, to be sure, but let’s face it: There’s not going to be a second Watchmen here.  The prequels won’t have anywhere near the longevity of the original.  But DC will make a lot of money right now.

Here’s the thing: SO much effort is going to go into these prequels… these are big name creators, and you know DC is going to advertise like mad.  It’ll be a pricey big push on their end to put the books out there, which they’ll easily recoup.  But then what?  They make some money this year and that’s the end of it.

So what if they got big name creators to come up with new ideas that target new readers, and put some solid money behind that instead?  That could pay off for ages, with new characters and series and a broader audience.  Don’t put Brian Azzarello on some Rorshach prequel… put the advertising money behind the next 100 Bullets.  Don’t have Darwyn Cooke write a Silk Spectre book… invest in a cool and interesting take on a side character that gets you the new Catwoman.  Do new things and grow the brand instead of putting so much effort into a limited cash windfall.

I know that sounds very pie in the sky, but remember this: Watchmen wasn’t created to be the most famous graphic novel of all time.  It was just some maxi-series they did in the 80s, with no real expectations.  It came out of an environment where talented creators were given room to try out new things, with the support of their publisher.  And now, because of that, a) DC’s been making money for AGES off of it, b) comics have become a respected medium, and c) the bar was set higher for everyone, resulting in better comics.  Everybody wins!!

DC hasn’t been thinking long term lately.  Their recent relaunch was a lot like these prequels, a momentary burst aimed at the people who buy their stuff already, and the relaunch is already losing steam only five months in.  There are other examples too (PUT YOUR SHOWS ON NETFLIX, DC!!  GET THE KIDS HOOKED NOW!!) but I’ve blathered on long enough.  My point is that short term money grabs are not a sustainable way to run things.  It’s exciting to have something new and crazy every few months, with a flurry of discussion and anticipation and all of that, but slow and steady wins the race.  Before Watchmen is unnecessary as a story, and their money and support could be much better used elsewhere.

Finally, these books are going to be SUPER late, right?  Lee Bermejo, Jae Lee, Adam Hughes, J.G. Jones, and Amanda Conner are all fantastic artists, but they aren’t known for their speed.  The final issues of some of these minis might be coming out in 2014.