A few weeks back we learned that Wonder Woman’s background role as the secretary of the Justice Society in the 1940s wasn’t some sort of patriarchal, sexist scheme.  Instead, it was actually about William Moulton Marston wanting complete control of his character.  Today we’ll gain an even better appreciation for the people behind All-Star Comics.  Not only were they not sexist jerks, there were also some really impressive messages of tolerance in the book.

All-Star Comics #22 begins with Dr. Midnite strolling to the Justice Society headquarters when he comes across some ruffians beating up another boy.  He asks them what their problem is, and then straightens them out after they explain:

For the rest of the issue, various members of the Justice Society get sent through time to fight prejudice in various historical eras.  They all return to the present, keen to teach others the importance of understanding your fellow man.  The entire Justice Society goes to a local school to spread their message and tell the kids that bullying others because they’re different is anti-American, and they all say the Pledge of Allegiance together:

SIDENOTE: You may have noticed that the phrase “under God” wasn’t included.  That’s because it wasn’t part of the original pledge.  It was added in the 1950s when everyone was all fired up about the godless commies, around the same time America put “In God we trust” on their money and legislated other religion-based empty gestures.  So if someone ever tries to point to “under God” as an example that America is a supposedly Christian nation, show them this issue of All-Star Comics!!  Separation of church and state, ya’ll!!

Anyway, after the school says the Pledge of Allegiance, Wonder Woman pops up with this impressively open-minded aside:

“Regardless of RACE, COLOR, or RELIGION!” is a pretty huge thing to say in 1944.  I mean, Catholic/Protestant was still a big divide, as evidenced by the beginning of this comic, much less hot button issues like race!!  It’s fitting that Wonder Woman is the one to point out the inclusionary nature of “liberty and justice for all”, seeing as equality and fairness were common themes in her own comics, and it’s nice to see them echoed in All-Star Comics as well, what with its different creative team.  Marston was a hardcore feminist, but Gardner Fox had some progressive ideas too!!

Then in ­All-Star Comics #27, we learn about another group that we need to treat fairly.  Covering race and religion wasn’t enough… the Justice Society is also all about helping people who are physically disabled: 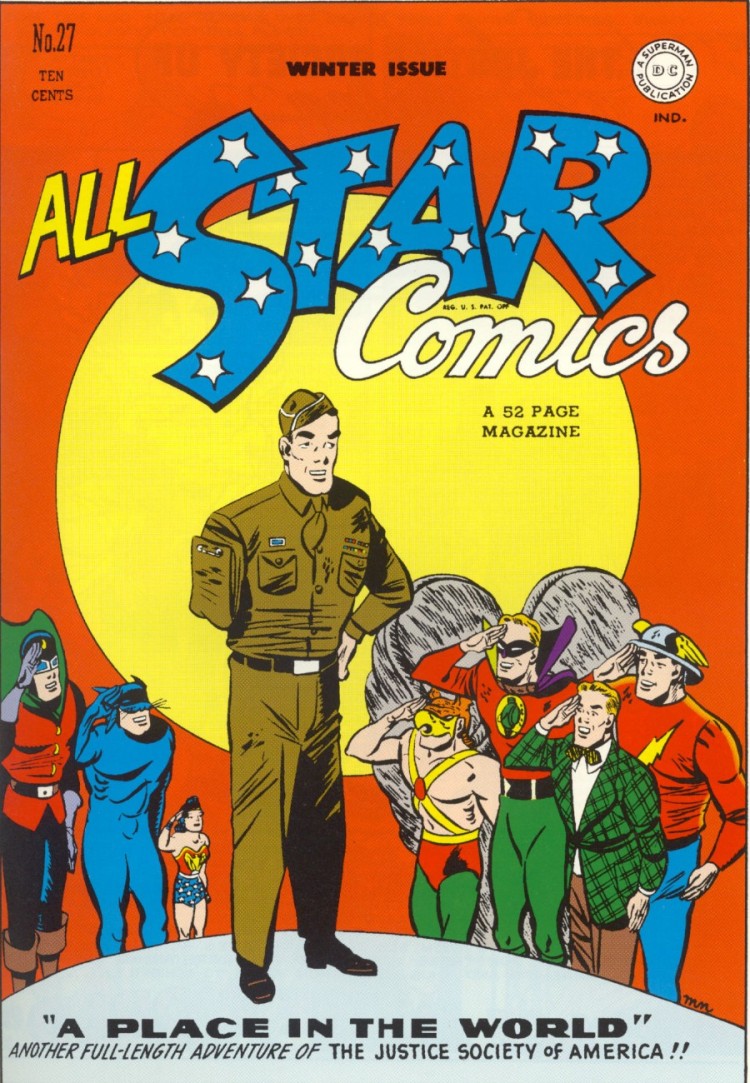 The issue ended with the Justice Society writing a pledge that disabled individuals aren’t to be shunned or pitied but rather should be treated equally.  The pledge page also showed a series of physically disabled people who accomplished great things: 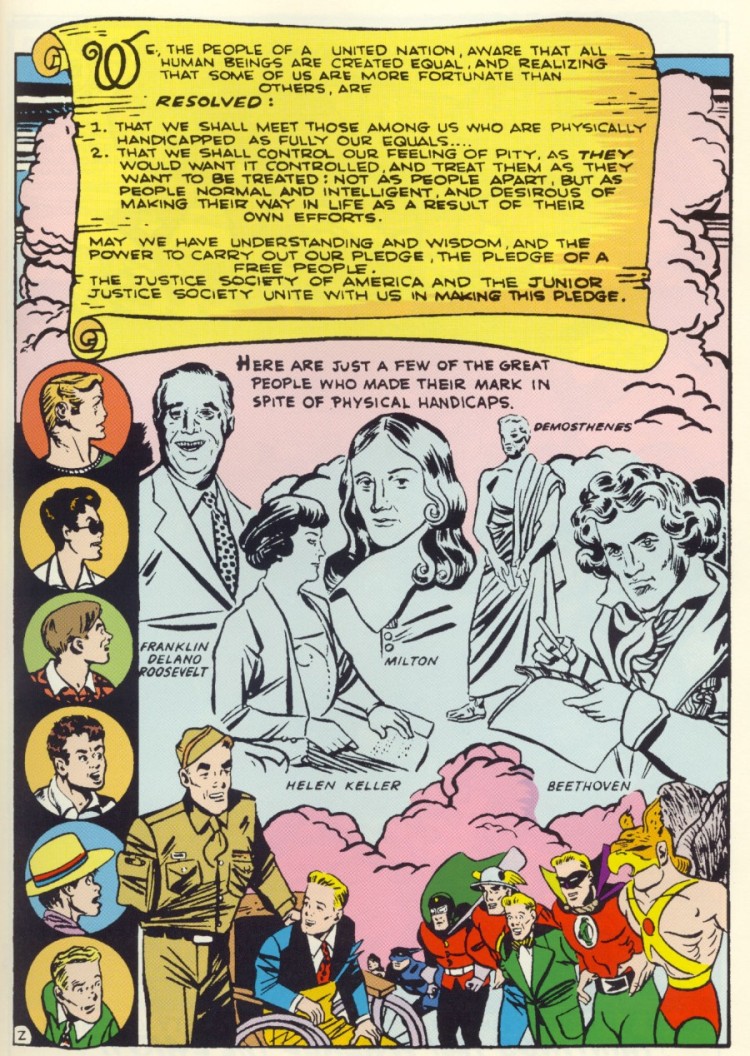 The Justice Society was REALLY into equality.  Regardless of your color, religion, or physical disability, the Justice Society had your back and considered you a friend.  It was an impressively progressive message for the early 1940s, and one I was surprised to find.  There’s a lot of bad stuff in Golden Age comics, and it’s really cool to see such positive messages.  It’s no wonder that the new Justice Society in Earth 2 has a gay Green Lantern… the team’s been tolerant and open-minded for ages!!