Here’s another shot that I saw on Tumblr that looks like an official design, but I’m not 100% sure: 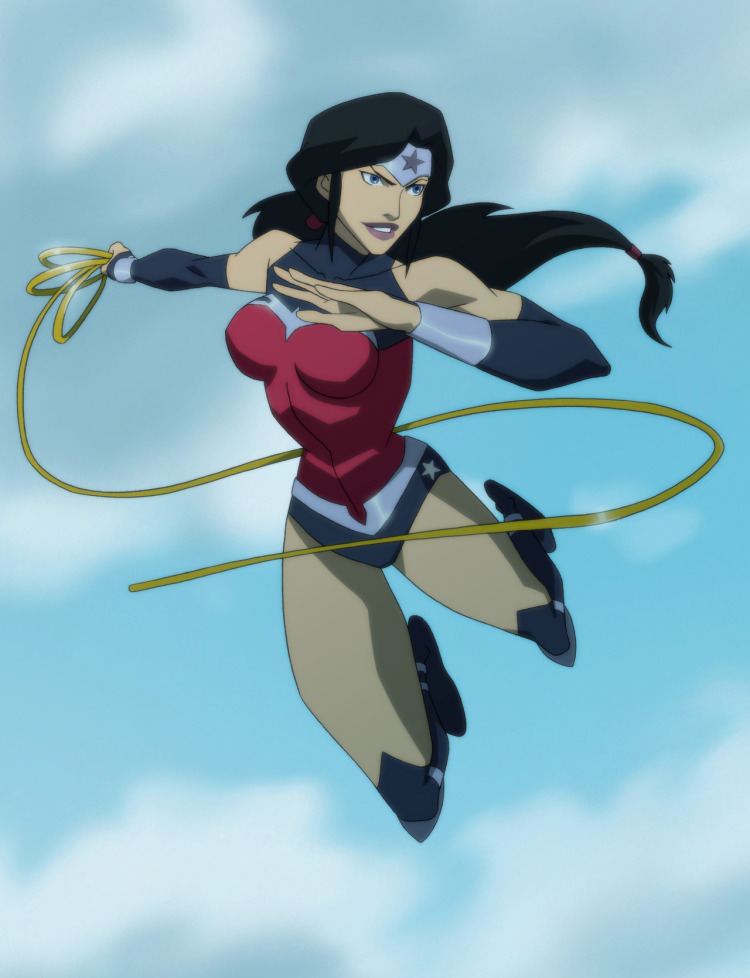 She’s got sleeves, though not all the way up to her shoulders, and the top of her torso is covered.  This is rare; the Flashpoint movie replaced Wonder Woman’s full-bodied armour with a much more revealing outfit, and now they’re moving in the other direction.  Now that I think about it, Justice League: The Flashpoint Paradox basically copied her New 52 costume, so maybe that’s why we’ve got an adapted outfit now.

For comparison with the comics, here’s how the scene with Steve Trevor first looked in Justice League #3:

Obviously, the movie version is covering a lot more skin, and we’ve lost that weird tiara that Jim Lee tried to make happen, to no avail.  Cliff Chiang drew the classic tiara from the get-go in the New 52 Wonder Woman series, and Jim Lee’s jacked up headband fell by the wayside as soon as he left the book.  I’m also glad to see the armband and choker are gone.  I don’t much care for them.  And Wonder Woman in a ponytail is not only a cool look, but sensible as well.

The only thing I don’t like about the new costume is its lack of detailing.  I quite like the lines and stars in the torso of the New 52 outfit, though more so when Chiang draws it; Lee makes it a little too busy.  I think it’s a cool look, especially with the simplification of the top of the bustier to a smaller, less obtrusive design from the past ornate eagles or stylized WWs.  In this new movie design, the breast design is even simpler, with just a plain sea of red underneath it.  I think I little bit of detailing there could have gone a long way.

Overall, it’s a cool new look for Wonder Woman, and I’m excited to see her in action in Justice League: War.  The Flashpoint movie, while weirdly dark and gory, felt like a big step up for the animated line in various ways, and I’m curious to see how they translate this story.  The new Wonder Woman costume is certainly going over well from everything I’ve heard thus far.  Everyone on Tumblr and Twitter seems rather enthused, and I’ve seen a substantial amount of fan art already for something that just was announced.