As I type, Warner Bros. is hosting a film panel in Hall H at San Diego Comic-Con, and they kicked off the show with Zack Snyder and the stars, a snippet of footage from Batman v Superman: Dawn of Justice, and, most relevant to my interests, a shot of Gal Gadot as Wonder Woman. Let’s take a look:

First off, this is definitely Wonder Woman, which is really good. She’s got a tiara, bracelets, a lasso, boots, all of the stuff we expect Wonder Woman to have. They haven’t screwed with the costume in any big ways, and any of the changes are about what you’d expect when a comic book costume is adapted for the big screen. They’ve stayed very faithful to the character, and I’m really glad about that.

They just put out a high resolution image, so let’s go through this with a fine tooth comb, starting at the top:

I’ve got to be honest: I hate the tiara here. It’s needlessly complicated, and doesn’t look like Wonder Woman’s tiara should look. It’s a simple design that’s been roughly the same for 75 years. It comes to a point at the top, has no fancy adornments or lines or what have you, and there’s a red star in the middle. It’s rather iconic. This is not that, which I find a little bit disappointing. The tiara should scream “WONDER WOMAN!!” and this does not.

You’ll note there’s no choker, which is a change I do like. The choker’s she’s had since the New 52 began never really worked for me.

Let’s move down to the torso:

The bodice is very much New 52 Wonder Woman, with a couple of tweaks I like. There’s also a belt/strap thing that I assume leads to a sheath for her sword or some such. It looks like they’ve gone with gold for the breast plate instead of silver, so hooray for the classic colouring, and they’ve opted for a smaller belt instead of a big plate sort of thing which looks good. They’re definitely going for an ancient armour vibe, and pulling it off nicely here. I think everything going on in the torso turned out really well.

It’s really, really short. They could have done briefs and we’d see just as much skin. But so it goes with Wonder Woman; you’re gonna get a lot of leg. And I like what they’ve done here. It looks functional and matches the bodice well, keeping that ancient armour aesthetic going, and while this picture has a general red/brown hue to it, it looks like the skirt is blue. There are no stars, but I really didn’t think there would be. It’s a tricky thing to have not look silly, especially given the ancient vibe they’re going for. Could be a little longer, but I like this too. 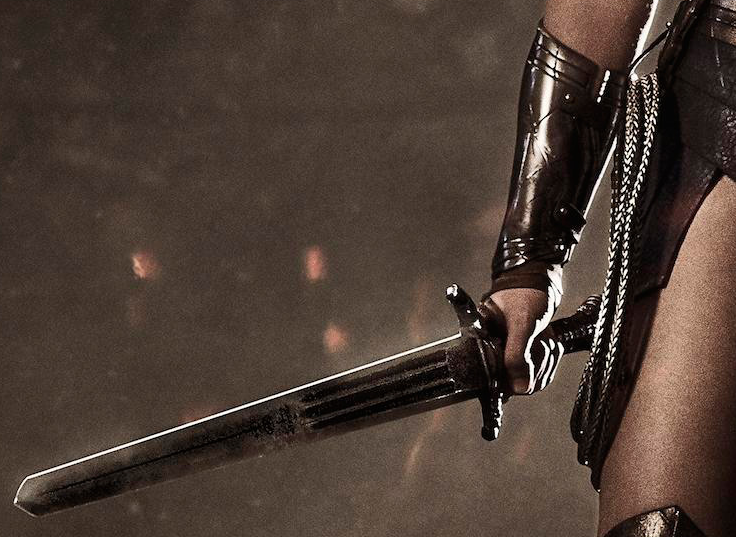 The bracelets look really nice! I like the detailing, and the leather around the wrist. Straight, flat bracelets would probably be rather boring on screen, and these look cool, functional, and fit the rest of the outfit well. And there’s a lasso! I’m so glad there’s a lasso. It looks like a lasso should, and is on her hip where it should be. That’s very fun.

The sword is cool too. It’s looks a little stubby, but that may just be the angle she’s holding it. The metal’s a bit dull, but so is all of the metal in this picture. So it goes with a Zack Snyder movie, really.

It looks like they’ve gone for bracers more so than actual boots. The line down the middle is reminiscent of the white stripes that go down Wonder Woman’s boots, and I would have liked to see the white here, or something similar for a contrast, but these look cool. They match the rest of the costume, and look pretty bad ass.

My only real issue here is the heels. They’re not stiletto-esque, I suppose, which is something, but even as a sort of wedge heel it’s entirely impractical and unnecessary. After spending all this time constructing a cool, functional warrior outfit, the heels kind of undercut the effect. It’s really hard to fight in heels. It’s just not practical. The gal’s gonna twist her ankle.

But overall, I like it. The only thing I’m really irked about is the tiara, because I love the classic tiara and see it as such an iconic element of the character. I’m not wild about the colouring as well, but given how dull and grey Man of Steel was I’d have been an idiot to expect bright colours. This is just one picture, obviously, but the colours all sort of muddle into a brownish tone, and I hope that in the movie we’ll get more of a contrast between the red of the bodice, the blue of the skirt, the gold of the chest piece and belt, and what I assume is the silver of the bracelets (from this image, it’s hard to tell their exact colour). I think that Wonder Woman should be a bright character, but if you’re going to make Superman all dark and grayish then a less vibrant Wonder Woman continues that style.

I’m still super concerned about the movie as a whole. Man of Steel looked cool before it came out too, and then it was god awful. I also have serious reservations about Zack Snyder and David Goyer and how they approach female characters. But on the plus side, my bar for Batman v Superman is set so low that I now find myself pleasantly surprised when things turn out well. And I think that, all together, Wonder Woman’s costume turned out well. The outfit is good, and Gal Gadot looks pretty fierce and bad ass. I can’t wait to see her in action! The proof is in the pudding, and we’ve got a bit of a wait for that, but yeah, this picture makes me fairly happy.

15 thoughts on “The First Image Of Gal Gadot As Wonder Woman In Batman v Superman: Dawn Of Justice”