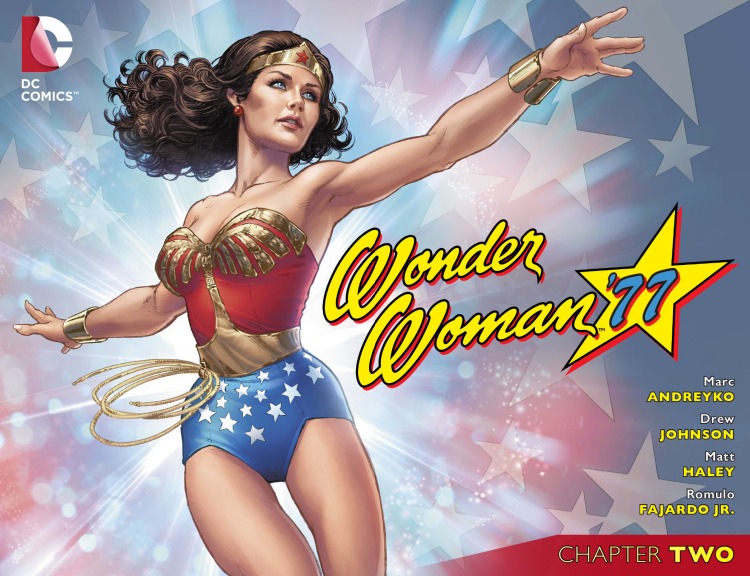 After a bit of delay, Wonder Woman ’77 #2 came out late yesterday afternoon on Comixology, so this review is a day late. So it goes. When we last left our intrepid heroine, she was at a bustling discotheque in her Diana Prince identity, trying to track down a Soviet defector, when she came across Silver Swan. Now, in the second issue, things get dangerous. Diana turns into Wonder Woman when she realizes that Silver Swan is using her singing to turn the crowd into zombies, but then Silver Swan makes the entire group attack her. Not even the most stout hearted of men is immune; the issue ends on a cliffhanger, with Wonder Woman held at gunpoint by Steve Trevor!

This was just an okay issue for me, largely because it felt very brief. In my review of the first issue, I mentioned that the creative team wasn’t making the most of the format and were moving more at the pace of a regular print issue instead of maximizing the story in each digital issue. This is even more pronounced in this second issue. There’s a big fight, and that’s about it. It’s a good fight, with some fun things going on, but there are a lot of pages that are just two panels or less and as a result the story is over very quickly. There’s nothing bad about the writing, it’s just sparse and a book you can whip through in two minutes isn’t ideal for weekly installments.

The art remains solid, but I noticed that as the book goes on the likeness to Lynda Carter is becoming somewhat intermittent. Some panels capture her well, while others just look like any generic Wonder Woman. Johnson and Haley seem to have a handle on her look when they’re closer up on the face, but once the art pulls back some they have a bit of trouble capturing Lynda Carter from afar when less detail is available to them. And really, this must be a tricky task. She’s got such an iconic look, and to communicate that in what often amounts to a fairly small drawing is probably quite difficult.

I don’t really have a lot else to say about the issue because it was so quick. Middle issues are always a tough review to begin with, much less ones where you don’t have a lot of story to talk about. Wonder Woman pulls a tiara boomerang move, so that was pretty fun. But, getting back to the book’s quickness, said boomerang move takes up two entire pages. Literally 10% of the book is dedicated to it. I love a tiara boomerang move as much as the next guy, but that’s too much space.

Still, the book is a good time and I think it will read great in print form. I’m looking forward to the finale next week, and for the next storyline as well. Andreyko is a very good writer, and with this story under his belt I’m optimistic that he’ll have a better handle on how to make the most out of digital storytelling in the next arc.