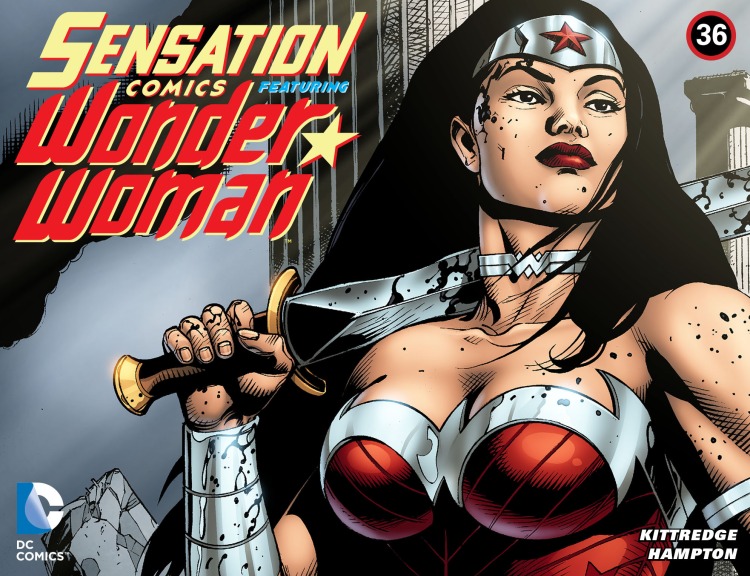 We’ve got something a little different from Sensation Comics this week. The book isn’t beholden to any particular style, but what we usually get is standard superhero fare or something a little cuter and kid friendly. Sensation Comics #36 is much grittier than what we’re used to, in a fitting way. It’s a monster story set in Gotham City, so Scott Hampton’s unique style is a good match.

The story is fairly straight forward. Echidna is a monster who lives in Gotham City, and her three kids were captured by some villains driving around town in a church van. Wonder Woman learns about her situation, pledges her help, and starts busting down doors and busting up goons to figure out what’s going on.

I enjoyed Caitlin Kittredge’s take on Wonder Woman from the very start of the book when a bored out of her mind Diana exits a charity function, talks back to some street harassers, and then ditches her heels to run to assist someone when she hears a cry for help. Her Wonder Woman is much more about action than words, and eager to get in on a fight when one arises, but she’s no hothead either. The best moment in the book is when Wonder Woman sees a monster attacking a man and, after quickly sizing up the situation, she sides with the monster. It’s a fun reversal of what we’d expect in this scenario. Wonder Woman has deep mythological roots, after all; fighting monsters is her jam. But Wonder Woman’s main focus is always the truth, even more than monster battling. She takes the time to recognize that Echidna is reasonably aggrieved and that the man she’s accosting is sketchy and packing a gun.

The rest of the story is a lot of fun, with Wonder Woman tracking down the kidnappers and taking out goons. There’s also a cool guest appearance at the end of the issue that should make for an entertaining team-up next week. Plus there’s lot of mystery remaining. You know someone has kidnapped Echidna’s children, but we don’t know who or why. It could be a new villain, it could be an established villain. We’ll find out next week!

I like the art in all aspects but one. Hampton’s moody style is an excellent fit for a story about monsters in Gotham City. It’s grey and grimy in all of the right ways to capture a dark, ominous night in Gotham, and the muted colors set the scene well. Hampton does a good job with Echidna too, and his simple style with the monster is almost reminiscent of Mike Mignola, the platonic ideal for all creepy creatures. My only qualm is that his Wonder Woman doesn’t look great. With his simple linework, she comes off sort of flat. Her hair is literally flat, in fact; Hampton doesn’t give her much volume or style. All together, it’s a fairly dull take on the amazing Amazon: 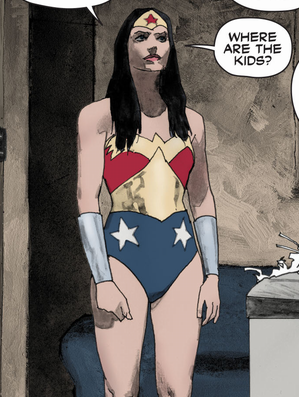 It’s not bad, just somewhat underwhelming. It fits the grey world that he and Kittredge have created, but I would’ve like to see Wonder Woman bring a little more light and vibrancy into this environment rather than sinking down into it. It’s a minor quibble, though. I really enjoyed everything else Hampton did here.

Ultimately, this was a solid first issue of a storyline I’m excited to read more of next month. Kittredge has a great handle on Wonder Woman and has put her in a very interesting situation, while the moody art well communicates the dark, monster-laden underbelly of Gotham City. I’m not actually sure when this story will be printed, though. The Doug Mahnke cover is new to me, and I don’t see it listed in any of the Sensation Comics print solicits. It might not be out until September, unless stuff gets shuffled around. I’ll dig around and try to have a more solid date with the story’s conclusion next week.