Wonder Woman is keeping busy yet again in September. It’s nice to have Wonder Woman showing up in a variety of books as of late. While the quality of these books may be hit and miss, more books means a higher likelihood of good stories. A couple years ago, Wonder Woman had just one book, and if you didn’t like it you were hosed for the month. Now she’s got four books, and every fan should be able to find something they like in at least one of them. So let’s see what Wonder Woman is up to in September.

WONDER WOMAN #44
Written by MEREDITH FINCH
Art and cover by DAVID FINCH and JONATHAN GLAPION
GREEN LANTERN 75 Variant cover by TERRY DODSON and RACHEL DODSON
On sale SEPTEMBER 16 • 32 pg, FC, $3.99 US • RATED T
Wonder Woman is on the trail of Donna Troy, who seeks refuge in London from both Diana and her past. But a new friend may be more trouble than help for the fleeing Amazon outcast!

Strife! I enjoy Strife, so to see her shadow on the cover is a good sign. Whether the Finches’ can do her justice is a whole other question, but Strife brings some potential for fun, at least. Also, Donna Troy is on the lam and Diana makes a new friend, which isn’t a terribly exciting solicit, but hey, Strife!

What I really want to talk about is how rad the Dodsons’ variant cover is. I love that it’s Green Lantern month but the Dodsons stuck him way in the back and just focused on Wonder Woman looking cool in her invisible jet. The Dodsons drawing Wonder Woman is always a good time, and I’m glad that DC’s constant variant lines bring them back to the character on a regular basis.

Next up, Superman/Wonder Woman #21 and it’s Green Lantern variant: 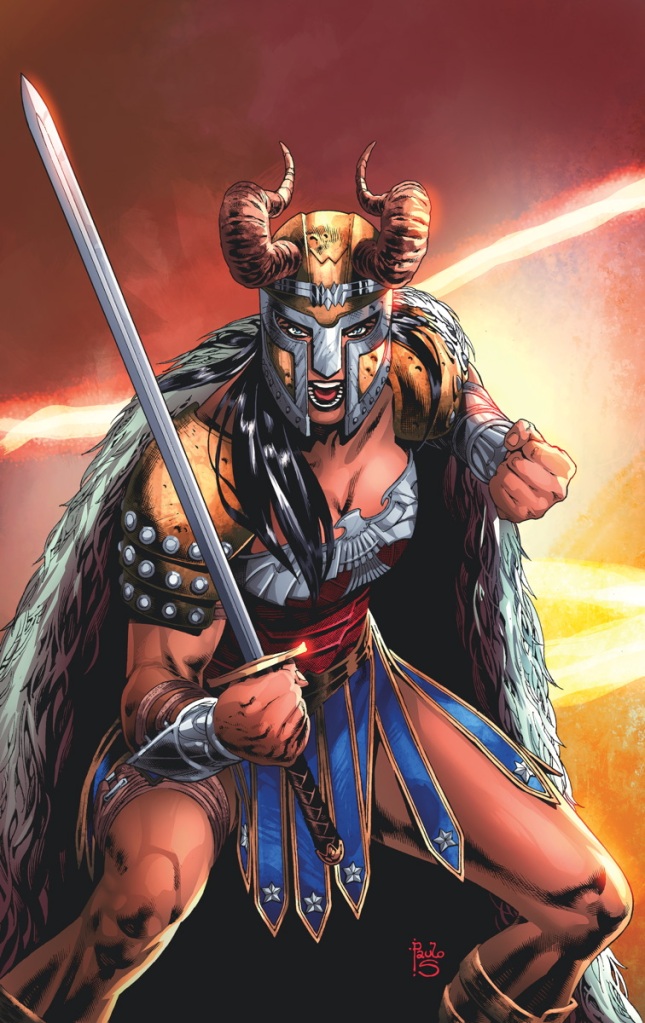 SUPERMAN/WONDER WOMAN #21
Written by PETER J. TOMASI
Art by DOUG MAHNKE and JAIME MENDOZA
Cover by PAULO SIQUEIRA
GREEN LANTERN 75 Variant cover by JOE QUINONES
On sale SEPTEMBER 16 • 32 pg, FC, $3.99 US RATED T
The epic “Truth” arc hits close to the heart as dark secrets come to light, forcing Superman and Wonder Woman to question whether their relationship can work in this new world of identities revealed and questionable actions.

That costume doesn’t do a whole lot for me. I feel like the god of war’s outfit should be cooler; more bad ass than warrior hobo. The solicit isn’t giving us a lot to go on, which has been the case ever since the “Truth” storyline began. They keep teasing us with a possible break up, but it’s turning into the boy who cried wolf at this point.

SENSATION COMICS FEATURING WONDER WOMAN #14
Written by KAREN TRAVISS
Art by ANDRES GUINALDO and RAUL FERNANDEZ
Cover by NEI RUFFINO
On sale SEPTEMBER 16 • 40 pg, FC, $3.99 US • RATED T • DIGITAL FIRST
It takes “Nine Days,” the gods say, for an anvil to fall to Earth from Olympus. But what happens when it strikes the world of men? Nyx, primordial goddess of night, is indifferent to the fate of the mortals below when she decides to teach her daughter Strife a lesson. Diana has nine days to step between two warring factions of godhood and stave off a disaster for those caught in the crossfire.

It looks like we’ve got another three parter digitally, which will comprise a whole print issue. That’s always a bit of a risk for an anthology book. If the story isn’t great, it’s all you’re getting! But Sensation Comics has been far more hit than miss, and Karen Traviss is a really good writer. The story sounds like a lot of fun, and I’m excited to check it out. 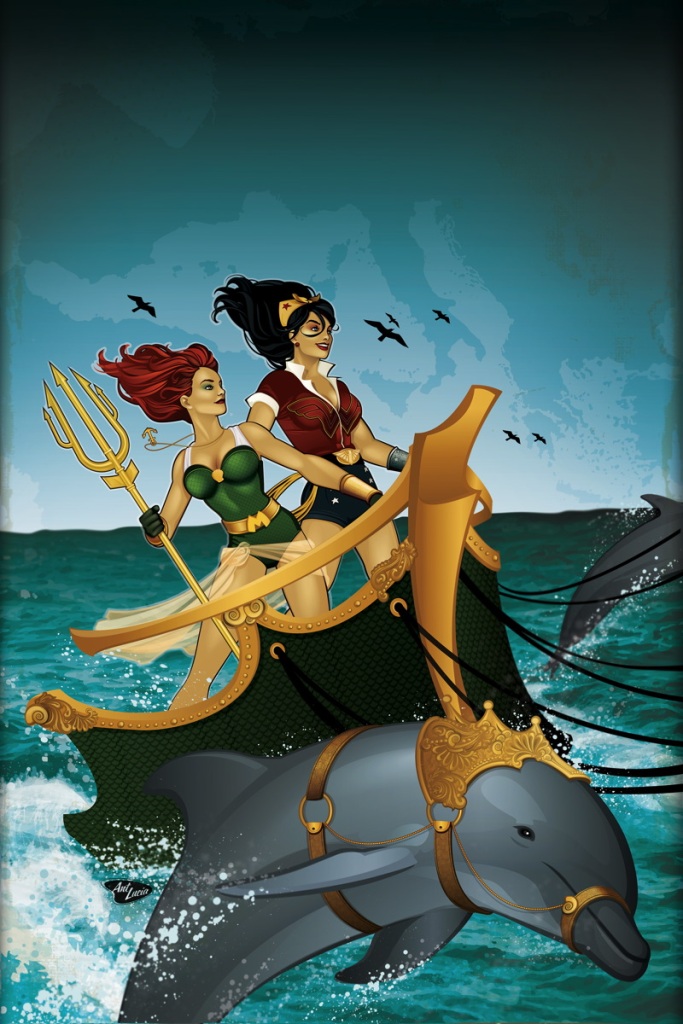 DC COMICS BOMBSHELLS #2
Written by MARGUERITE BENNETT
Art by BILQUIS EVELY and STEPHEN MOONEY
Cover by ANT LUCIA
1:25 Variant cover by KEVIN WADA
On sale SEPTEMBER 2 • 40 pg, FC, $3.99 US • RATED T • DIGITAL FIRST
Wonder Woman defies her mother’s orders and attempts to break Captain Steve Trevor out of his prison cell on Themyscira. But to accomplish this, she’s going to summon a little help from the deep in the form of Mera, Princess of Atlanta. Meanwhile, in Russia, two new heroes are about to be created to serve the Soviet Union: Supergirl and Stargirl!

Wonder Woman and Mera are teaming up for a prison break, so this issue sounds like the best thing ever. Also, I’m assuming that Mera is the Princess of Atlantis, not the Princess of Atlanta like the solicit suggests, unless they’ve radically changed her origin story. I’m intrigued that there are new artists on board. I love Marguerite Sauvage, but rotating artists could be cool too. I’m looking forward to this book a lot.

Look for all of these comics this September in comic shops and online!