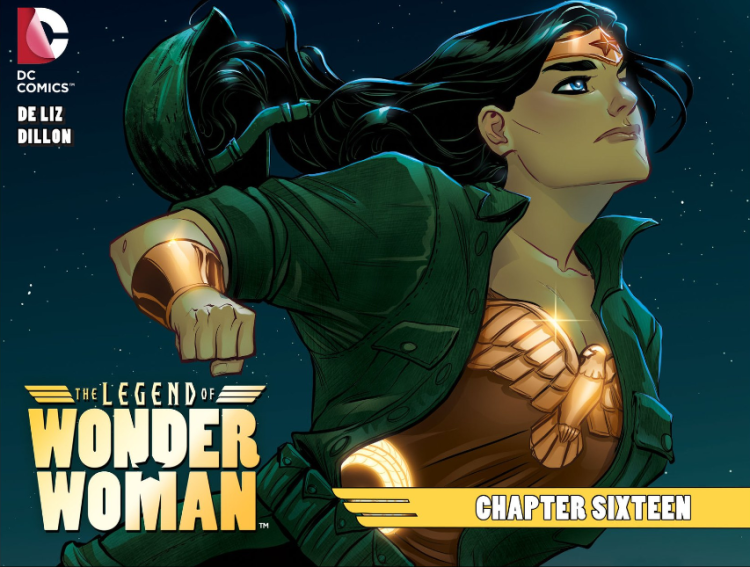 Diana Prince and her pal Etta Candy have made the long trek across the Atlantic Ocean and are now set up in Normandy, France. Diana’s just finished her nurse training and Etta is preparing for her first big solo show to entertain the troops, but there’s a darkness hanging over everything. There’s the war itself, of course, but more than that there is the Duke of Deception, stalking the battlefields of Europe and sending untold soldiers to their graves as he marches across the continent.

The legions of casualties are certainly keeping Diana busy at her new nursing gig. I really like that Renae De Liz has made Diana a nurse again; I’m all about a Golden Age callback, and when Diana first arrived in America in 1941 she became a nurse to take care of her charge, Steve Trevor, before becoming his secretary after he was well enough to leave the hospital. The original Diana was stateside with a fairly leisurely post, but De Liz stays true to the classic stories while adding some more excitement to the mix by posting Diana in Normandy, near the front lines.

Historically speaking, it was certainly a chaotic time to be in France. The date at the start of today’s installment of The Legend of Wonder Woman is July 3, 1944, about a month after the D-Day landings brought Allied troops to the shore of Normandy to begin the push back against Nazi forces. While D-Day was a roaring success, the Allies didn’t just march straight to Berlin. Months of arduous battle followed. Today, you can drive from Normandy to Berlin in about twelve hours; it’s a pretty easy trip. The Nazis didn’t surrender until May 1945, and the toll was high over those eleven months of conflict across the continent.

The comic makes what was a terrible situation even worse with the addition of the Duke of Deception. Few who face him survive to tell the world about it, which is why Diana wants to be near the front lines. Those who do survive rarely live for long, but being in the nursing unit allows her to gather information on the Duke from the injured soldiers before they succumb to their wounds. It’s an unpleasant place for Diana to be, and having to view the brutality of war and see people die clearly takes a toll on Diana.

This too is a departure from Wonder Woman’s original Golden Age adventures. Back then, the price of war never really came up. Wonder Woman was constantly in the thick of battle, but was breezy and carefree, throwing around quips as she defeated enemy soldiers with ease. She even sunk an entire fleet of Axis ships in one issue. In the middle of the war itself, there wasn’t much in the way of reflecting on the cost of the conflict and the horrible loss of life; it was all “Rah rah, beat the Axis!” I like that, from the get-go, De Liz is keeping Diana away from that kind of patriotic propaganda and is exploring the harsh reality of war.

The book isn’t all dark and dreary, though! Far from it. Etta’s there with Diana to cheer her up and take her out to her show, where they promptly run into their old friend Steve Trevor. Etta slyly leaves the two of them together to get to know each other better while she heads on stage to try to top Pamela Smuthers. Yes, friggin’ Pamela Smuthers is there too! They thought they’d left her in London, but nope. They can’t get away from her. So yeah, there’s a lot of fun in the mix, and perhaps the blossoming of some romantic feelings between Diana and Steve. They almost got to dance together before more casualties from the Duke of Deception had Diana rushing back to the nursing station.

All together, it was yet another great issue of this fantastic series. After the light fun of America, we’re now in the thick of the war itself and moving toward what should be an epic confrontation between Diana and the Duke of Deception. Having seen the horrors of war firsthand now, I very much doubt that Diana will be able to remain on the sidelines for long.