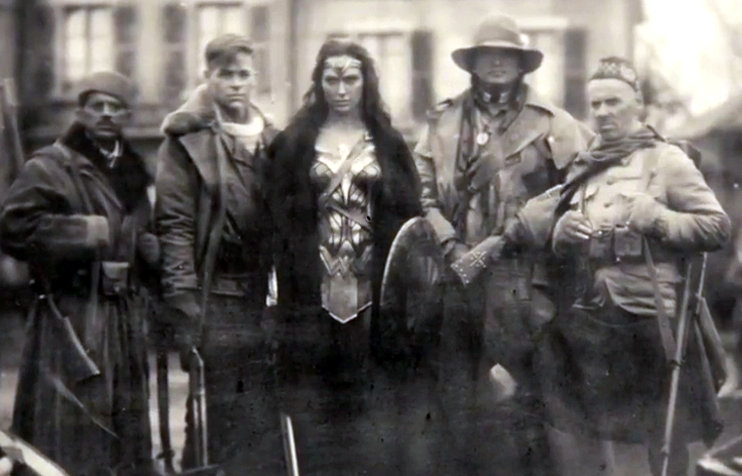 There’s a cool new article up on Indian Country that addresses one of the mysteries to come out of Batman v Superman. In the scene where Bruce Wayne learns that Wonder Woman has been around since World War One, he sees an old timey photo of Wonder Woman with a group of soldiers. One of them is Chris Pine as Steve Trevor, another appears to be Ewen Bremner in an as yet unnamed part, and one looks to be a Native American character. Indian Country spoke to the man who plays this latter character in Patty Jenkins’ upcoming Wonder Woman, actor and stuntman Eugene Brave Rock.

Brave Rock was sparse on plot details, and told them, “I am only allowed to say I was in London for five months filming the Wonder Woman movie. That is all I am allowed to say.” He actually didn’t know he was auditioning for Wonder Woman when he came in to read for a part, and he said that shooting the film was “as an amazing experience.” Brave Rock also noted that he was allowed to have a lot of input into his character:

“DC really let me have a voice. Usually movies have a lot of do’s and don’ts and they tell you you have to do things a certain way, but in this case, even with wardrobe, it was awesome. In the end, they let me decide a lot about my character. Previously, movies have even told me how I had to braid my hair, and you don’t have a choice – but this was not the case.”

It’s good to hear that Patty Jenkins and DC deferred to Brave Rock and his own knowledge of his culture; that should make for an especially authentic and respectful depiction. It’s also encouraging news in the wake of several reviews of DC’s latest film, Suicide Squad, labelling the film as racist.

We don’t know a lot about the story or characters in Wonder Woman yet, and Brave Rock didn’t give any hints as to who he’d be playing, but he is listed as “Chief” on IMDB. That suggests he might be playing Apache Chief, a Native character from the animated series Super Friends, or perhaps his unofficial comic book counterpart, Manitou Raven. DC has had several other Native characters in their comics over the years as well, and two of them in particular seem like they might be good fits. Pow Wow Smith was a 19th century sheriff in several Western tales, and that era is pretty close to Wonder Woman‘s 1910s setting. There was also another “Chief” in the mix, Super-Chief, an Iroquois warrior who found a meteorite that gave him powers and also extended his life; Super-Chief is a legacy character, with the meteorite being passed down through the family. Brave Rock might be playing one of these characters, or perhaps a completely new one. We’re still ten months away from the film’s release, and DC seems to be keeping their cards close to their chest with Wonder Woman.

The recently released trailer doesn’t offer many hints about Brave Rock’s character either. I think he’s in it, briefly, around the 1:41 mark:

It looks like he, Steve Trevor, and maybe a couple of the other guys from the photo above are ducking out of the way as an explosion goes off. It might just be someone with a similar hat, though. The trailer doesn’t delve into the supporting cast much in general, really.

I’m excited to find out who Brave Rock is playing, and that he’s part of the cast. Period films so often fall into the trap of casting all white actors, especially European war movies, and I’m glad to see that Wonder Woman is aiming to present a more diverse portrait of the time. Between Brave Rock and Saïd Taghmaoui, it looks Diana and Steve are going to have a multi-cultural squad, and that’s very cool. Be sure to check out Indian Country‘s piece for more information on Brave Rock, and of course go see Wonder Woman on June 2, 2017.