This post is as much for me as it is for you, reader friends. New York Comic-Con was this weekend, and with it came lots of fun news, announcements, and reveals, nearly all of which I missed. My sister got married this weekend (congrats to Kate and Tom!), and I was all wrapped up in that. It was certainly a better way to spend the long weekend than scanning the internet for cool NYCC news, but now the week has officially begun and it’s time for me to dig in and catch up. So here’s a look at what Wonder Woman news came out of the convention this weekend!

First up, let’s chat about Professor Marston and the Wonder Women, an upcoming biopic about Wonder Woman’s creator William Moulton Marston and the women who played key roles in his life. Angela Robinson will write and direct the movie, with Luke Evans starring as Marston, Rebecca Hall playing his wife, Elizabeth, and Bella Heathcote joining them as Olive Byrne, the final member of the Marstons’ polyamorous triangle. This could be an absolutely fascinating film; Marston’s life was interesting and unusual, to say the least, and it has all of the makings of a great story. I’m curious to see how much DC gets on board and what sort of Wonder Woman stuff they’ll be allowed to use, but even just the story of their lives leading up to the creation of Wonder Woman is quite a compelling tale. It’s good to see the women behind Wonder Woman getting recognized from the get-go as well, rather than shining the spotlight on Marston alone. I’m very excited to see how this one turns out!

In other film news, Warner Bros. Animation might have another Wonder Woman cartoon film in development. It doesn’t seem to be official yet, since the quote was, “they have Wonder Woman on their radar in some form or fashion,” but that’s better than no Wonder Woman at all. There were no details on whether this would be a sequel to the 2009 direct-to-DVD film Wonder Woman or something completely new, but things might be happening on the animation front.

We’ll stick with movies for one more bit of news: DC Collectibles revealed a line of statues for the upcoming live action Wonder Woman film, and they all look quite lovely. Here’s Wonder Woman on a horse: 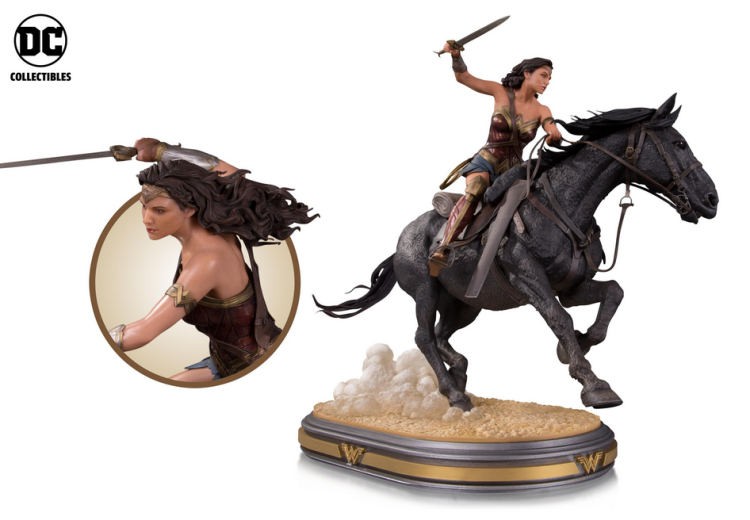 And you can click through the link to see a couple more. They’re very nice but also pricey, ranging from $150-300 USD. Expect them out in the ballpark of June 2017, when the movie is due to hit the big screen.

Moving to comics, we’ve got a rad crossover on the way with Batman ’66 Meets Wonder Woman ’77, a comic book teaming of Adam West and Burt Ward’s Batman and Robin with Lynda Carter’s Wonder Woman. Marc Andreyko and Jeff Parker are writing, with art from David Hahn and Karl Kesel and covers by Alex Ross and Mike Allred. Check out this peek at Alex Ross’ first cover: 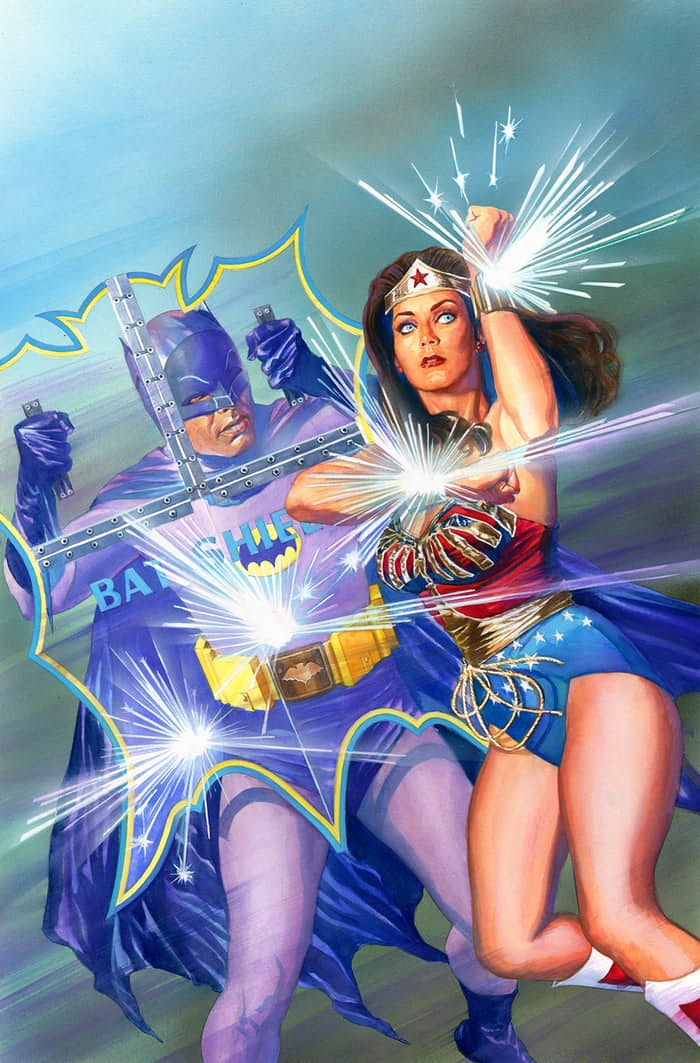 The six issue mini-series will premiere digitally in November and then hit comic shops in print form in January. It looks like the chief villains will be Ra’s al Ghul and Catwoman, which should make for a lot of fun.

This next news broke a bit before NYCC, but it’s too awesome to leave out: We’re getting DC Super Hero Girls Lego! Here’s a look at the Wonder Woman set, which includes an invisible motorcycle:

Other sets include Batgirl, Bumblebee, Harley Quinn, Poison Ivy, Supergirl, and more. Some will hit stores in December, with more to roll out down the line; Wonder Woman is in the second wave, due to come out in January. The sets are in the style of Lego’s “Friends” line, which they target at girls, and while I do miss the blocky classic Lego look on the minifigs, it does match a bit better with the style of the show. I’m definitely going to need to pick up a few of these sets, the Wonder Woman one first and foremost.

Artists Cliff Chiang and Jose Luis Garcia-Lopez were on hand for the event, and the stamps are now available to order online or in your local post office if you’re an American. I actually got to work behind the scenes a little bit on the stamps, consulting on the text that accompanies them in the packaging to verify that everything was historically accurate. It was a very fun process, and it’s so cool that they’re officially out in the world now!

I think that was all of the big news this weekend, but let me in the comments if I missed anything cool. Overall, it was a big NYCC for Wonder Woman, and there should be a lot of fun stuff on the horizon for Wonder Woman fans and collectors.