This February looks to be another busy month for Wonder Woman and her wider world, both in terms of single issues and some fun new collections. It continues to be an excellent time to be a Wonder Woman fan; the movie on the horizon really seems to be ramping up comic production at DC. So let’s take a look at what Wonder Woman is up to in February 2017, starting with her own series: 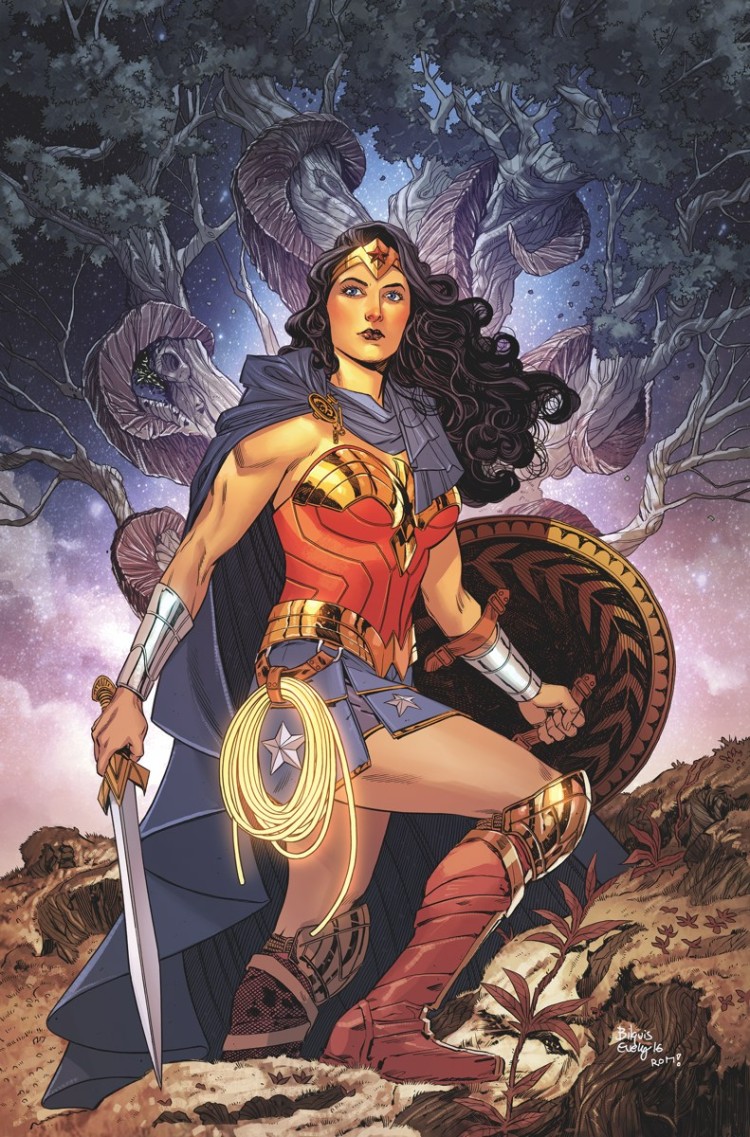 WONDER WOMAN #16
Written by GREG RUCKA • Art and cover by BILQUIS EVELY • Variant cover by JENNY FRISON
“GODWATCH” part one! Since the moment Wonder Woman arrived in our world, Godwatch has been waiting. But who are they, and what do they want? Diana’s journey to the truth continues with the origin of what may prove to be her greatest enemies.
On sale FEBRUARY 8 • 32 pg, FC, $2.99 US • RATED T

WONDER WOMAN #17
Written by GREG RUCKA • Art and cover by LIAM SHARP • Variant cover by JENNY FRISON
“THE TRUTH” part two! As Wonder Woman picks up the pieces of her shattered psyche, Barbara Ann Minerva walks into the devil’s lair to defend her…or is she being led into Godwatch’s trap?
On sale FEBRUARY 22 • 32 pg, FC, $2.99 US • RATED T

How great is that Bilquis Evely cover? She did a spectacular job on the Barbara Ann Minerva special issue last month, and I’m so excited that she’ll be taking over the odd-numbered issues for “Godwatch” after “Year One” ends. Nicola Scott is going to be a tough act to follow, but Evely’s already shown that she’s got the goods to hold her own. We’ve got some gorgeous comics in store for us.

In terms of the plots, it will be fun to dig into Godwatch and find out what they’re all about. We know a few of the players now from “The Lies” but clearly there’s something large and sinister at work here. As for “The Truth,” the solicit is a bit vague, but I enjoy that Barbara is remaining a key player in the book. Between her and Etta, it’s great to see Wonder Woman have some female pals.

Onto the always gorgeous Trinity: 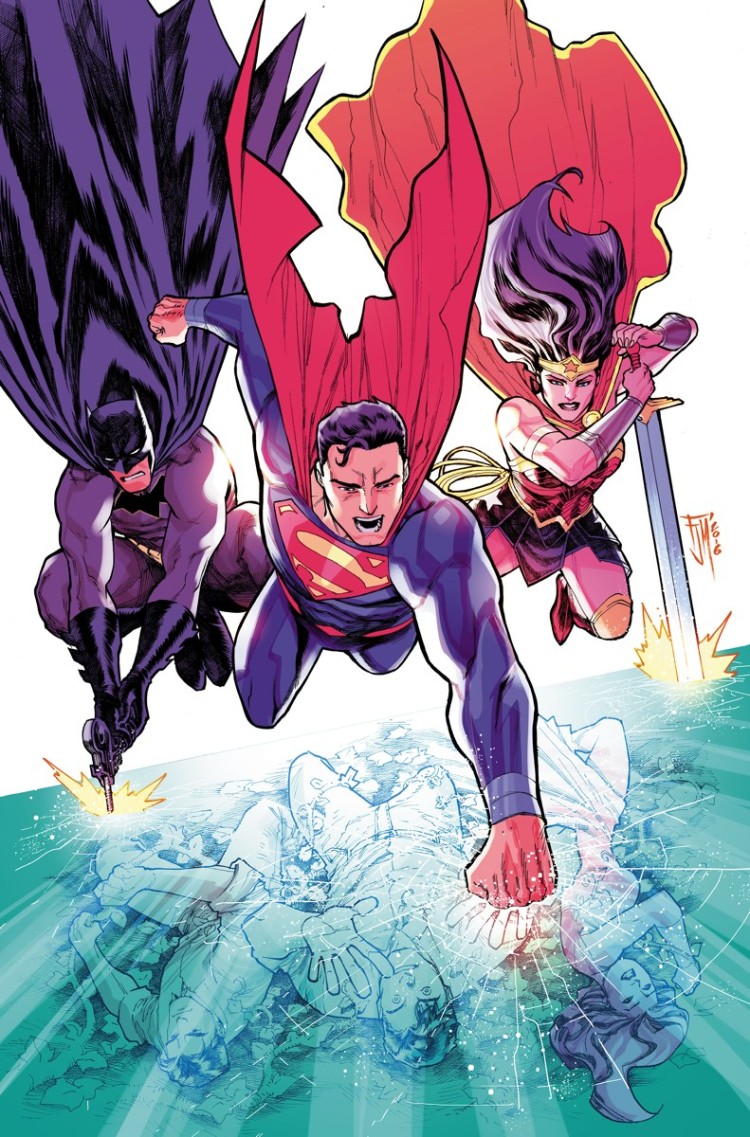 TRINITY #6
Written by FRANCIS MANAPUL • Art and cover by FRANCIS MANAPUL • Variant cover by BILL SIENKIEWICZ
“Better Together” part six! The horror that kept our heroes trapped in nightmares of their own making is now loose in the world, and it’s taking possession of Batman, Superman and Wonder Woman! When the spawn of Mongul holds the keys to the most powerful heroes in the DC Universe—no one is safe!
On sale FEBRUARY 15 • 32 pg, FC, $2.99 US • RATED T

I love this book. I’ve only read the first two issues, but they’re so stunningly gorgeous. The story is a lot of fun too. It’s kind of a chill team up, with the three heroes just being pals. I’m super into it. And it sounds like it’s building to something quite epic. Manapul’s knocking it out of the park so far with this series, and I’m looking forward to where it’s going.

Next up, The Odyssey of the Amazons: 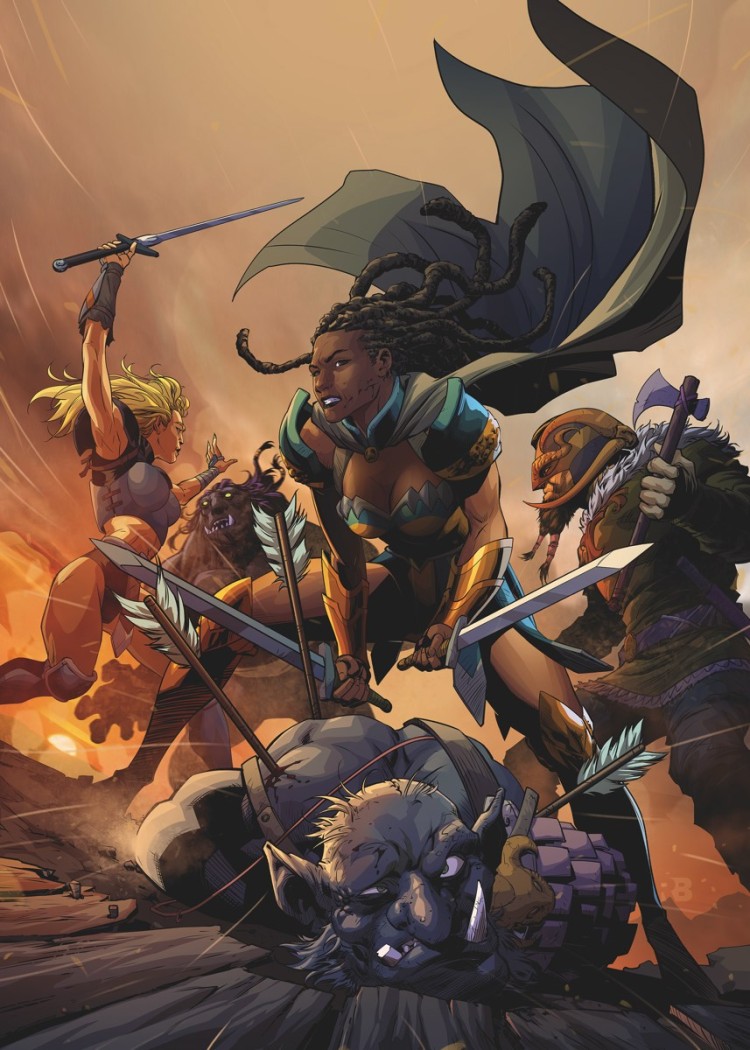 THE ODYSSEY OF THE AMAZONS #2
Written by KEVIN GREVIOUX
Art by RYAN BENJAMIN and RICHARD FRIEND
Cover by RYAN BENJAMIN
In the frigid lands to the north, Hessia and her Amazons find new allies: a band of Norsemen led by none other than Jon, the Viking Prince. Meanwhile, their captured Amazon sisters learn of the fate planned for them by Groa, Queen of the Storm Giants. And as Hessia and Jon prepare to launch a rescue, a new faction appears! Will these new players prove to be friend or foe?
On sale FEBRUARY 15 • 32 pg, FC, 2 of 6, $3.99 US • RATED T

There’s still a lot of question marks on this one, and it very much feels like a book that should have come out a few years ago, before Rucka and co. revamped the Amazons. But still, it’s Amazons vs. Storm Giants, and that could be cool. We’ll see how it goes. Hopefully the book is a pleasant surprise. 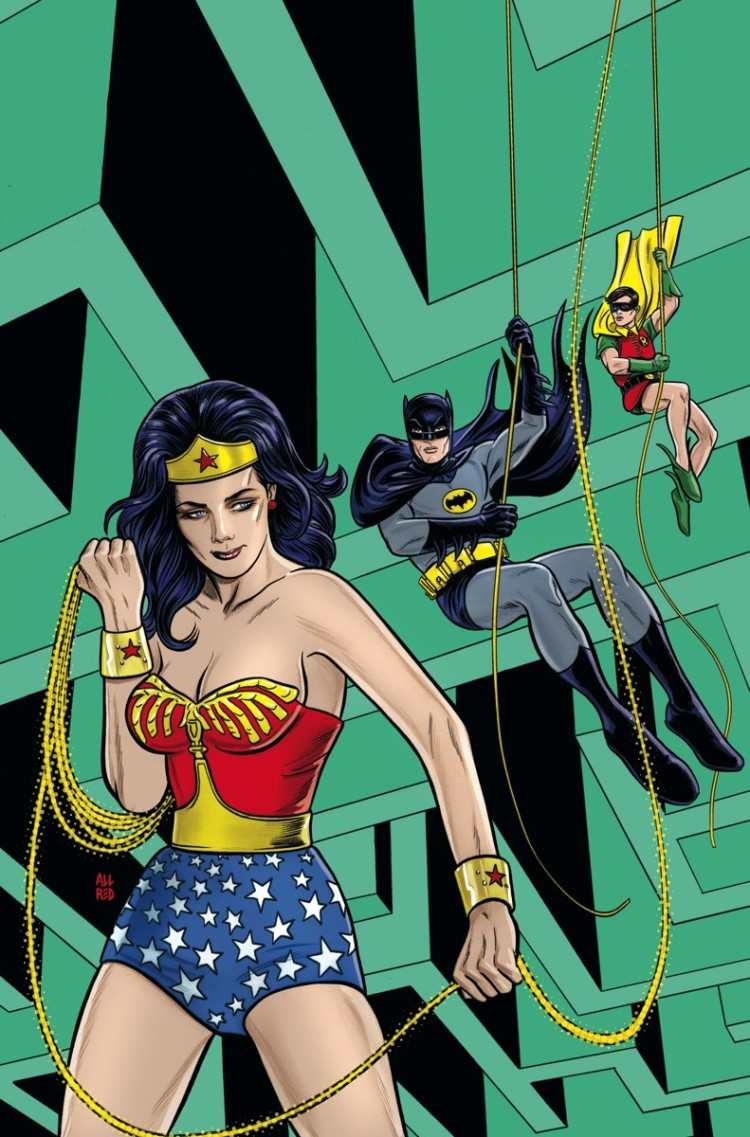 BATMAN ’66 MEETS WONDER WOMAN ’77 #2
Written by MARC ANDREYKO and JEFF PARKER
Art by DAVID HAHN and KARL KESEL
Cover by MICHAEL ALLRED
Bruce Wayne is only ten—and he’s already being hunted by Nazi soldiers and Ra’s al Ghul’s mysterious League of Shadows! Join the chase as he makes a discovery vital to his bat-future and watch what happens when Wonder Woman comes to the rescue!
On sale FEBRUARY 22 • 32 pg, FC, $2.99 US • RATED E • DIGITAL FIRST

The comic appears to be picking up on the split nature of the Wonder Woman TV show; the first season was set in World War Two, while the second and third picked up in the 1970s. So we’ve got young Bruce interacting with season one Wonder Woman here, which is very cool. This is such a clever way to merge these different universes. I’m really looking forward to this series.

Finally, there are a couple of cool collections on the way: 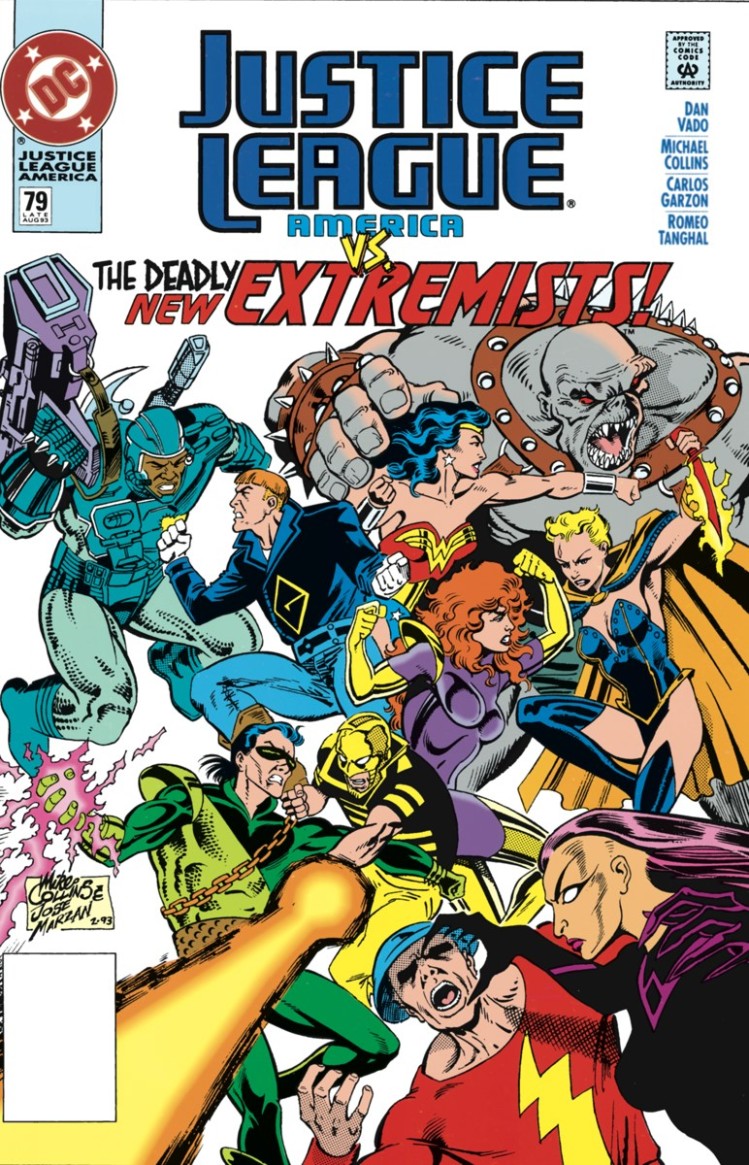 WONDER WOMAN AND THE JUSTICE LEAGUE OF AMERICA VOL. 1 TP
Written by DAN VADO and CHUCK DIXON
Art by MIKE COLLINS, KEVIN WEST, RICK BURCHETT, MARC CAMPOS and others • Cover by MIKE COLLINS and JOSE MARZAN JR.
In these never-before-collected stories from the 1990s, Wonder Woman takes over as leader of the Justice League of America, whether Green Lantern Guy Gardner, Booster Gold and Blue Beetle like it or not. Acting at the behest of the United Nations, the team must respond to a human rights crisis in a remote African nation, only to find the populace under the thumbs of the super-powered Extremists. The team then must jet to Norway, where the young superhero called Ice struggles to keep the nation out of the hands of her older brother. Collects JUSTICE LEAGUE AMERICA #78-85, JUSTICE LEAGUE AMERICA ANNUAL #7 and GUY GARDNER #15.
On sale MARCH 15 • 264 pg, FC, $24.99 US 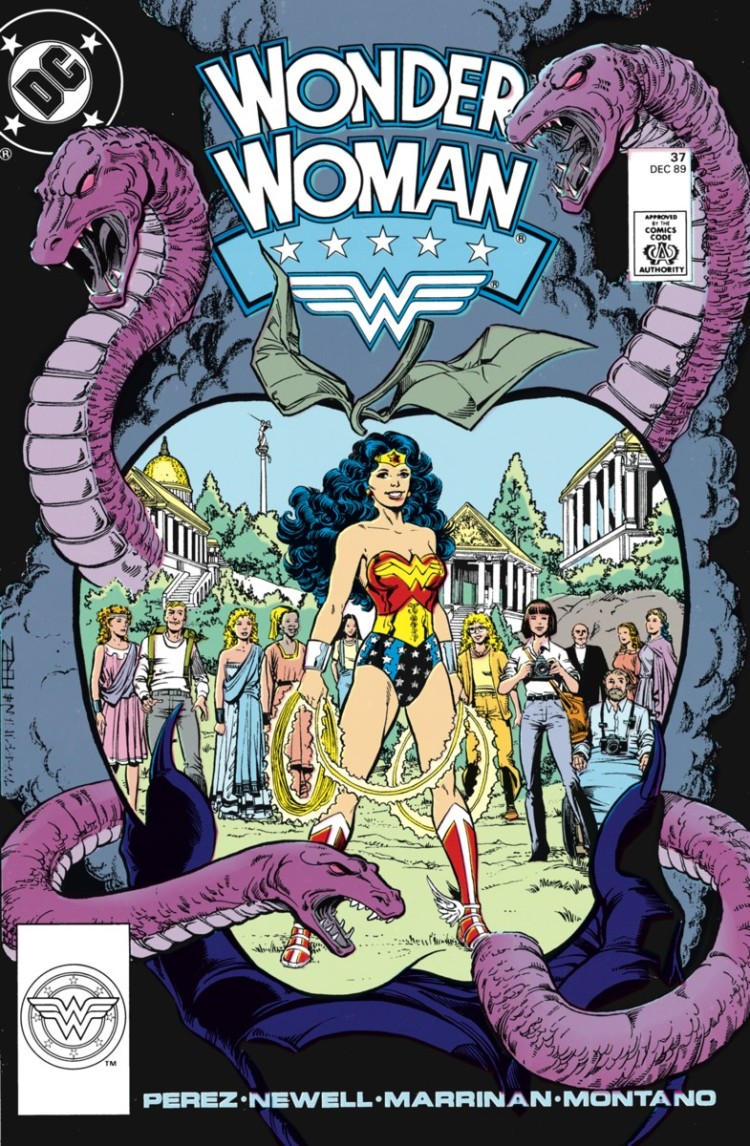 WONDER WOMAN BY GEORGE PEREZ OMNIBUS VOL. 2 HC
Written by GEORGE PEREZ and others • Art by CHRIS MARRINAN, JILL THOMPSON, COLLEEN DORAN and others • Cover by CHRIS MARRINAN and GEORGE PEREZ
Following the events of INVASION, Wonder Woman and Captain Atom must locate the missing Steve Trevor, while the citizens of Themyscira witness the arrival of a new man on their island. This volume also includes the origins of both Cheetah and Silver Swan, the appearance of a lost tribe of Egyptian Amazons and more! Collects WONDER WOMAN #25-45 and ANNUAL #2.
On sale MAY 10 • 552 pg, FC, $99.99 US

I was hoping that DC would continue their omnibus collection of Perez’s Wonder Woman run past the first volume, and they are! Nearly two years after the first collection, but oh well. It’s continuing on, and that’s exciting, plus it bodes well for a third omnibus to finish the run. Save your pennies and clear some shelf space because this is going to be expensive and massive.

Well, that’s quite a month! It’s nice to have a slew of new Wonder Woman comics to look forward to.