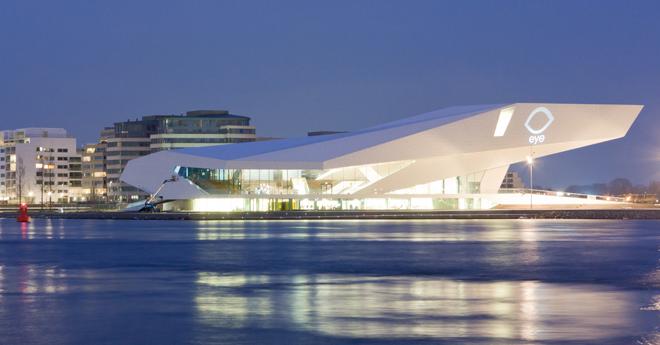 I am now home from my five day visit to Amsterdam, and it was such a cool trip. I’m from Halifax, which is one of the oldest cities in North America, but it doesn’t even come close to the history and legacy of Amsterdam and it was so fun to get to explore the city. While I had to keep my head on a swivel to avoid bicycles as I did so because they’re EVERYWHERE, I adapted to that pretty quick and got to see a good portion of the city.

First, though, here’s a hot tip, gang: If you ever get the chance to fly KLM, do it. We flew there and back on KLM, and it was far and away the best airline I’ve ever been on. They give you so many drinks and meals and snacks! Plus there are a pile of good movies to watch. I saw Moana, Arrival, Finding Dory, and Doctor Strange; it was great. So yeah, highly recommended.

The first day in Amsterdam was largely a blur. My mother came with me, because if you ever luck out and get a free trip to Amsterdam and your mother’s never been to Europe, you should take her. Plus she’s a swell lady! Our flight there was an overnighter but we didn’t sleep much, so we ended up crashing at the hotel when we got there, then exploring the area a bit in the afternoon, then more sleep. Or attempts at sleep, at least. Jet lag is rough, folks.

Day two was more exploration. We figured out the metro, which was super easy and convenient, and walked through some of the good shopping places in the city. I didn’t buy much, but I did an ice cream at this rad place called Banketbakkerij Van Der Linde; they only make vanilla ice cream but it’s amazing and there’s always a line up out the door, even on a cool day like Thursday was.

Day three was my presentation, so I mostly went over my notes all day. We had some near-drama when I arrived at the EYE Film Institute and the presentation wouldn’t play; we tried my laptop, then another laptop, but nothing was showing up on the big screen. Everyone behind the scenes at the Imagine Film Festival was super great, though. The technical folks worked like crazy to get everything sorted while everyone else chatted with me and joked about our predicament. I’m still not sure exactly what was wrong, but after replacing the same small box several times, it worked. We started a few minutes late, but everything worked perfectly from then on.

The presentation itself was very fun to do. I always get super nervous before I have to give a talk, but once it gets going it tends to be more pleasant, and this was no exception. The crowd was wonderful, which helps a lot. We had a good number of people in, all of whom seemed very enthusiastic to hear about Wonder Woman, her evolution, and the role of her costume therein. I started with Marston, of course, and dug into the bizarre origins of both Wonder Woman and his own background, psychological and life-wise. Then we discussed the American symbology of the costume and how it was meant to help Wonder Woman fit in and thus help America while slyly spreading Amazon values there as well. We also looked at this great panel: 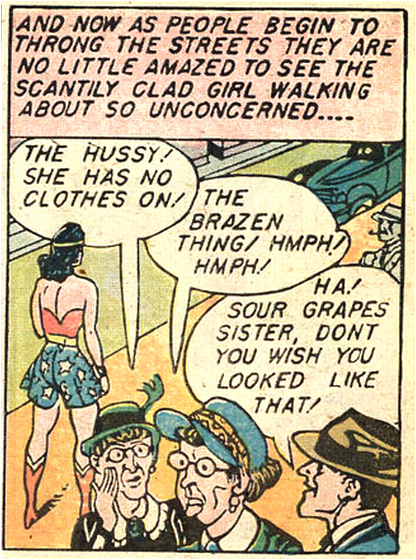 Talking about the costume led to a deep dive into her bracelets and the bondage metaphors of Golden Age Wonder Woman comics, which segued nicely into an examination of her golden lasso as a symbol of feminine power.

From there, we passed through the Silver Age pretty quickly because her costume stayed largely the same and that was the main focus of the talk. The Bronze Age and Wonder Woman’s mod revamp, however, merited close examination. We looked at the story in which Diana Prince got trendy clothes to help Steve Trevor out of a jam:

After which Steve started to show interest in Diana for the first time ever and Wonder Woman realized she no longer needed to be super to keep his interest. This introductory issue really set the tone for this whole era, in which Diana gave up her superpowers and got very into mod fashions, all while falling for every man she met and behaving hysterically when they inevitably betrayed her. It was an attempt to make Wonder Woman a more modern, relevant character that failed rather spectacularly.

But it did lead to Gloria Steinem campaigning for Wonder Woman to return to her roots, which was followed by her appearing on the first cover of Ms. magazine and eventually the Lynda Carter television show. The latter was particularly fun to chat about, and I showed a clip of Wonder Woman talking to her sister Drusilla in both of her identities so that we could see how Carter played them differently. We also chatted briefly about her awesome Wonder Woman scuba suit, because how could we not? 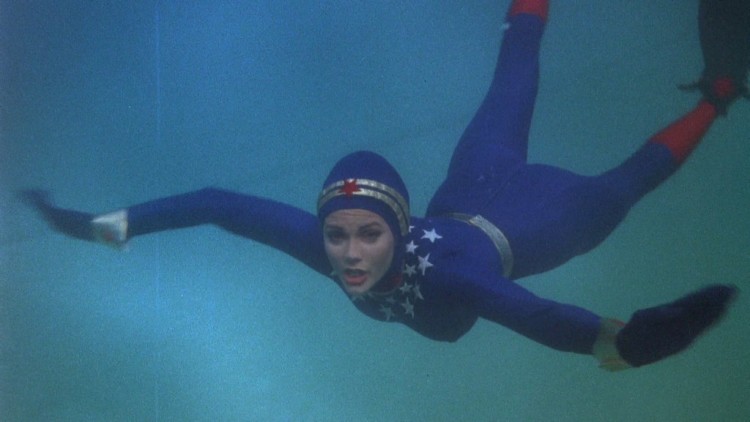 This all was followed by a quick run through the Perez era, the ridiculousness of the Deodato era, and how Wonder Woman’s costume has remained fairly constant since the television show. Any big changes rarely lasted for long, even much hyped alterations like her ill-fated pants and leather jacket in 2010. We looked at the New 52 era as well, which led to Gal Gadot and her onscreen Wonder Woman. It was a film festival, so I wanted to be sure to give her a lot of attention.

The early discussion surrounded Zack Snyder’s brown, desaturated version of the costume which had all of the classic Wonder Woman elements but none of the brightness and vibrancy one would expect from Wonder Woman. We also watched a clip of Wonder Woman showing up in Batman v Superman: Dawn of Justice for the first time, i.e. pretty much the only good part of that movie. Her general mysteriousness in that film led to some speculation about the character in her new solo film, and I was glad to dig into how Patty Jenkins seems to be embracing color. We watched the latest trailer and dug into how we got a lot of the elements we would expect in a Wonder Woman origin story, including the requisite incarnations of the characters and her corresponding outfits. But we also discussed how her sword seems to have superseded her lasso as her primary weapon:

And the way that this, intentional or not, is an assertion of masculine concepts of heroism and power over the more classic feminine power represented by her lasso.

Finally, we talked about “Rebirth,” particularly how Rucka and Scott reasserted the importance of the lasso in “Year One.” Talking about Scott led us to Wonder Woman recent, short-lived United Nations ambassadorship, and we discussed the body-shaming petition for her removal and how reducing the character to her appearance ignores what she has meant as an inspirational figure for generations of fans.

So yeah, it was a fun talk! And there were some excellent questions after, which is always fun. My favourite may have been the woman who chatted about the historical reality of the Amazons, which was very cool, but they were all great. Then I got to hang out with the film festival folks for a bit, who were delightful and kind and so enjoyable to visit with.

Day four was the Rijksmuseum; it’s HUGE and took up the entire afternoon, really. I got to see Van Goghs, and Rembrandts, and Vermeers, but my favourite painting of all was this one by Nicolaas Baur called “A Women’s Skating Race on Stadsgracht in Leeuwarden, 21 January 1809”:

There was a skating race for a gold cap-brooch and 64 unmarried women entered, but some of them were so into the race that they threw off their cloaks and skated bare armed, causing quite a stir among spectators who considered them shockingly immodest. There was such an outcry that it was the last women’s race for several years.

So that was my trip! Huge thanks again to the Imagine Film Festival for bringing me to Amsterdam; it was such a nice city to visit, and everyone at the festival was wonderful. Thanks to everyone who came to my talk as well. It was very fun to spread the word about Wonder Woman on a whole new continent!