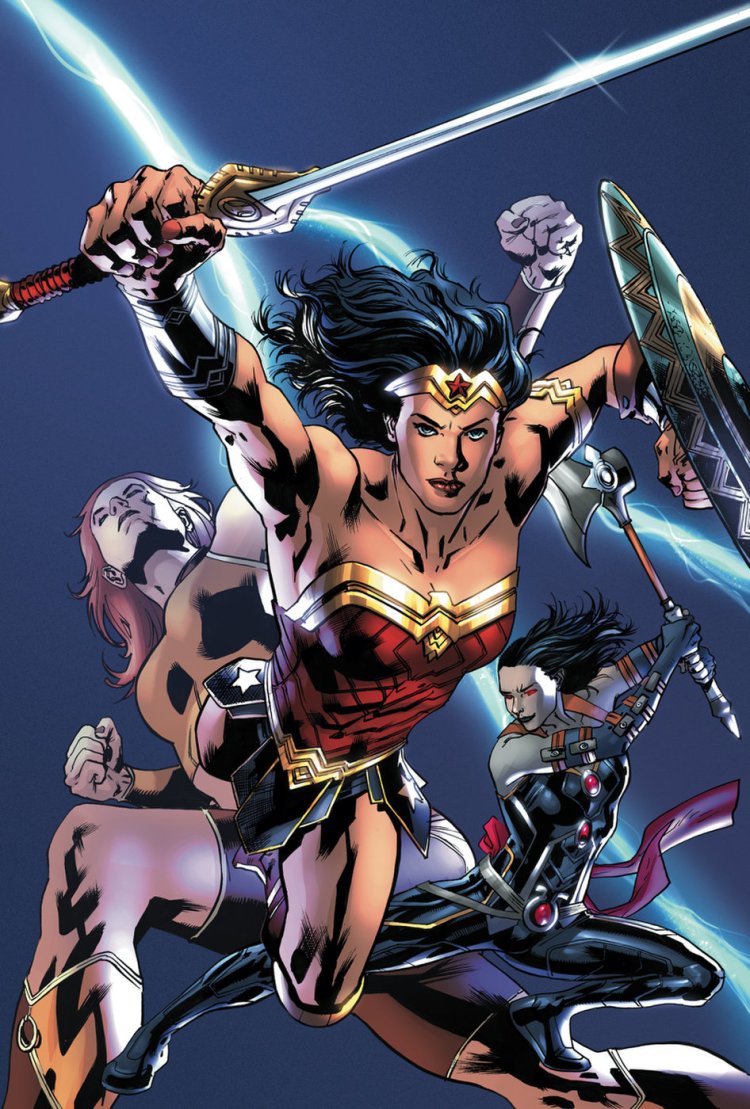 DC Comics announced a new creative team for their Wonder Woman comic yesterday, with James Robinson coming on board to write the book alongside Carlos Pagulayan and Emanuela Lupacchino on art. They’re going to do a six-issue arc that will run bi-monthly from September through December, and it will pick up on threads first introduced in DC’s “Rebirth” special a year ago. The solicit for the first issue says:

Who is Wonder Woman’s brother? Taken away from Themyscira in the dead of night, the mysterious Jason has been hidden somewhere far from the sight of gods and men…but his life and Wonder Woman’s are about to intersect in a terrifying way, bringing them face to face with a cosmic threat they never imagined!

I am underwhelmed, to say the least. Wonder Woman has been stellar since its “Rebirth” relaunch, with Greg Rucka, Bilquis Evely, Nicola Scott, and Liam Sharp revitalizing the character and setting her on a good path after several rough years following the book’s previous relaunch in 2011. Shea Fontana and Mirka Andolfo are set to take over the book in July for five issues, and that sounds like it’s going to be a fun run. I was pleased to see a female writer take over the series, and Mirka Andolfo’s art is always a treat. But now we’ve got a male writer at the helm again (and one with a problematic writing record at that). We do have Emanuela Lupacchino on art, and she’s marvelous, but the solicit is all about “legendary writer James Robinson,” along with credits over a decade old, and doesn’t mention the art at all. Robinson is also focusing on Wonder Woman’s mysterious brother, a bizarre turn that shows DC seems to have learned nothing from the success of the Wonder Woman movie.

First, with so many amazing female writers working in comics right now, DC should be handing over the reins of Wonder Woman to one of them long term. The book has had some great male writers over the years, and Rucka’s tenure over the past year was fantastic, but it’s time for a new perspective on the book. Men have written Wonder Woman for the vast majority of her seventy-six year history. Meanwhile, giving the Wonder Woman film to Patty Jenkins gave Warner Bros. its first critically acclaimed superhero film in years because she brought something new to the table. DC should do the same with the book and bring in one of the many amazing women working in comics right now.

Second, a brother? Has DC not seen any of the responses from folks coming out of the Wonder Woman movie? No one left the theater thinking that there needed to be more men in the mix. They wanted more Diana, more Amazons, more Etta, more of all of the amazing women that made up the film. Introducing Diana’s brother is the last thing anyone wants right now. Long term fans of the comic have been loving the female-centric storyline of the “Rebirth” era thus far, while potential new fans curious about the character after the movie are going to have no interest whatsoever in some new dude.

The brother angle was a weird idea from the start. When the “Rebirth” special came out a year ago, the tease struck me as a fundamentally dumb move. Diana is a unique creation, the only child of the Amazons. To introduce a sibling is unnecessary enough (unless they brought back Nubia, which could be cool if done right), but to make it a male sibling just totally misses the point of having Amazons in your universe. They let you tell cool stories about women! DC doesn’t need to stick a man in there; they can do fun things with the amazing women that they already have.

The people inside DC Comics can be dopes sometimes. Wonder Woman has never been more popular. The movie is a smash hit! And they’re putting out a comic book that’s going to appeal to few if any of her fans, new or old. It reminds me of 1973, when DC returned Wonder Woman to her Amazon roots after she appeared on the first cover of Ms. Magazine and became a mascot of the women’s lib movement. Just like today, Wonder Woman was hugely famous outside of the comics, but DC handed the book to Robert Kanigher, an old white guy who ignored her new status and wrote a bunch of lazy, subpar issues that failed to capitalize on her popularity. Four decades later, DC is making the same mistakes.

Part of me is hoping that this is some ill-considered cleanup operation, that editorial is thinking, “Let’s deal with this seed we planted a year ago and then get on to a cool, different creative team in the New Year.” Maybe they’re just burning off three months of comics to follow up on this story that absolutely no one is clamoring for and they’ve got a great team lined up after that. That would be a dumb plan; better to just let the seed die. But at least it would be a plan with something better in the future. As is, this is just dumb and ill-timed, as well as a big missed opportunity to make the most of a huge moment for Wonder Woman. Even if this somehow turns out to be a decent story, which seems very unlikely but you never know, it’s just the wrong direction for the book right now. Put women in charge of Wonder Woman with women on the pages, please.