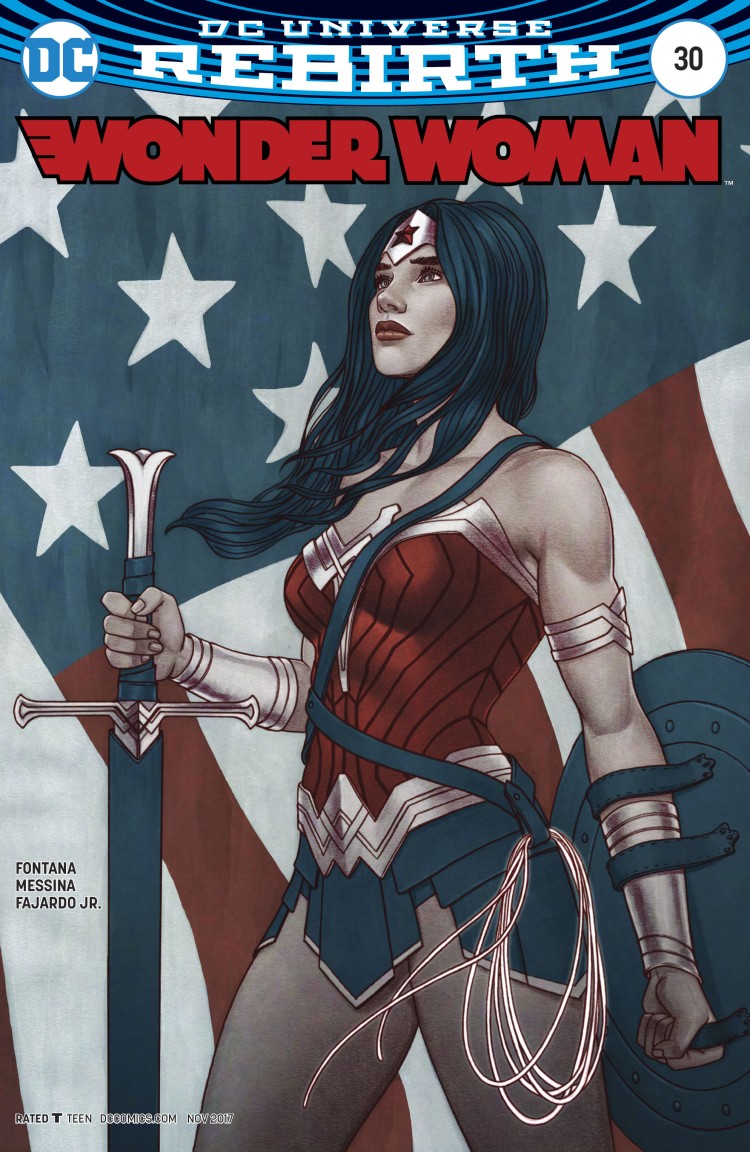 Today’s issue of Wonder Woman brings us the finale of “Heart of the Amazon,” a story that has challenged Diana on multiple levels. There were the villains, of course, a multitude of assassins that she and Etta dispatched with relative ease. But there were also more existential threats as Diana contemplated her heroic purpose. Yes, she’s a divinely powered superhero who can take on more than anyone else can bear, but she’s also just one person. Perhaps the gifts inside her were meant for something more, something that required a great sacrifice. We’ll get into it all, but first:

Don’t read this review if you haven’t read the issue!

So, it turns out that no, the gifts inside her weren’t meant for something more. At least, not yet and certainly not under these circumstances. Perhaps unsurprisingly, Hamilton Revere, the man who sent a group of assassins after Wonder Woman, is not a good dude and does not have the best interests of humanity at heart. After Diana willingly went to see him at the end of the last issue, curious if her divinely powered blood could help cure diseases like he claimed, things quickly took a dark turn. Revere wanted to develop an army of super soldiers, first and foremost, and use them to strike fear into the hearts of American enemies and compel global peace. Wonder Woman wasn’t into it because obviously that’s a terrible idea, and some enjoyable fighting ensued.

I think that anytime a Wonder Woman story ends with a message that men are bad and can’t be trusted with power, the writer is definitely doing things right. I mean, look around. Men ARE bad and CAN’T be trusted with power. That’s been true for time immemorial, and was also a key component of the original Wonder Woman in the 1940s; back then, she was straight up arguing for a matriarchal revolution. I loved Shea Fontana’s internal monologue for Diana in this issue as she fought back against Revere’s forces and reflected on the awesome responsibility of her powers and how she must be careful and judicious with how she uses them. Fontana also mentioned the golden lasso and the truths it reveals, which is key. Wonder Woman is, above all else, firmly rooted in the truth of things. She can’t lie to herself, or disguise selfish motivations with a benevolent facade. The lasso ensures that her motivations are pure, and thus she is best suited to the amazing gifts of the gods. Folks like military directors, world leaders, and soldiers don’t have a lasso, and thus should not be entrusted with such powers. The monologue is specific to the scene, but there’s also a larger implication that we as a society must be careful in selecting who we entrust with power, which is all sorts of timely.

On top of these deeper reflections, this issue also has Etta Candy pitching a bunch of grenades and using the lasso, which is just fun times. Steve Trevor’s reactions when Etta keeps pulling out grenades are priceless. Fontana’s done a wonderful job bringing Etta and her friendship with Diana to the fore throughout this arc, and I’m hoping that it’s something that sticks moving forward. They’re such a great pairing. And, again, their friendship harkens back to the 1940s as well. Fontana has tapped into some classic Wonder Woman here.

The art rotation continued this issue with the return of David Messina after Inaki Miranda drew the last outing, and he did a swell job again. Maybe even better than his first issue in some ways. His style felt a little looser this time around, which I enjoyed. He seemed to be channeling Mirka Andolfo somewhat as well, adding just a bit more of a cartoonish aspect to his work. Messina did well with all of the serious talking and discussion that kicked off the issue, and then really shone once the fighting began. The double page spread of Wonder Woman busting her way through multiple opponents is just gorgeously composed. And the colours by Romulo Fajardo Jr. add so much to that sequence. He captures the passage of time as Wonder Woman moves through her assailants by starting with pale colouring and making each image of her as she moves through her assailants brighter and more detailed until the final Wonder Woman is fully coloured in detail. Also, shout out to Messina for Diana’s swoopy hair in this spread. It’s so good.

Overall, “Heart of the Amazon” was an excellent Wonder Woman story, one that fully embraced her re-established status quo in the “Rebirth” era and captured the core of what makes her a great hero. It’s such a fundamentally good, enjoyable tale. It’s not a huge game changer like Rucka’s run, and it’s not some event tie-in or flashy crossover. It’s contained, stellar storytelling, and that’s so good to see. I hope we’ll get a lot more like this from Wonder Woman moving forward.

Well, after the next arc, anyway. For some reason, DC feels compelled to follow up on “Darkseid War” and the “Rebirth” special, stories from a Wonder Woman universe that is now drastically different. I have no idea why, but we’ve got six issues of stories about Wonder Woman’s brother ahead of us, so hold onto your hats. I’ll hope for the best, of course. You never know what could happen. But I’m not terribly optimistic about any part of what’s coming.

3 thoughts on “Wonder Woman #30 Review: The Heart of the Amazon Shines”