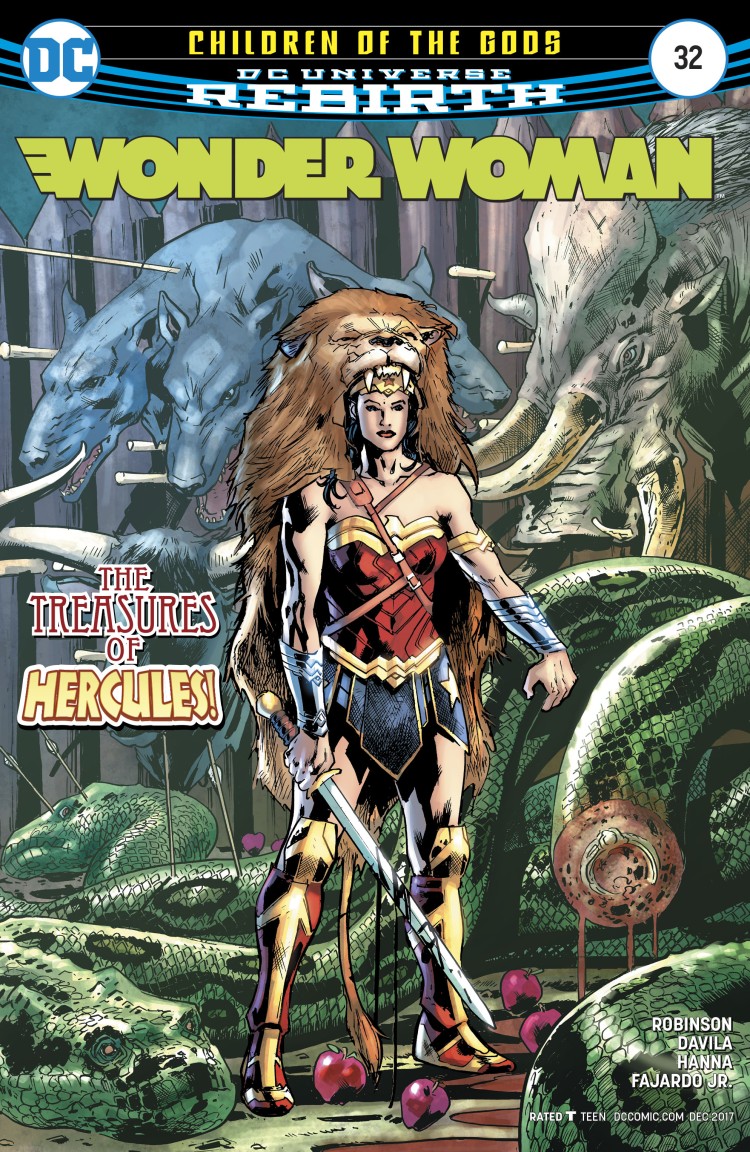 Let’s start this review with a question: How many female characters other than Wonder Woman have speaking parts in this issue? During the initial “Rebirth” arcs, there were a wide variety of women in the mix, from allies like Etta Candy and Barbara Minerva to villains like Dr. Cyber and Veronica Cale. Plus Amazons. A whole lot of Amazons. Wonder Woman‘s last arc, “Heart of the Amazon,” was essentially a Diana/Etta team up story, and it featured an array of women in all sorts of different roles, good and bad, primary and incidental. There was even an entire team of female assassins, with several deep cut characters from DC’s history. So now with “Children of the Gods,” the story that’s introducing Diana’s brother to the world for whatever reason, how many women other than the title character are involved? For this issue, one. One woman in the entire book. Her role takes up about half a page, and she directs Diana to her brother. That is all, and I think that speaks volumes about this arc and it’s creative team. We’ll get into the issue as a whole, but first:

I am about to discuss all of the dumb things that happened in this issue!

Look away if you haven’t read it yet!

So the lack of female characters is disheartening, especially since the book spent the last year and a bit building such a stellar cast of women around Wonder Woman. On top of that, it’s just not a very good comic book, on any level. The story is clunky, the writing is poor, the art is middling. It’s not an enjoyable read, and it’s so awkward that it’s hard to feel any connection to the story. Even the big emotional climax at the end of the issue when Diana sees her brother for the first time falls absolutely flat because it’s so painfully clichéd; they immediately recognize each other because they’re twins and feel their connection, and I rolled my eyes so hard that I may need to go see an optometrist.

James Robinson’s writing is unremarkable throughout the book. For example, there’s two pages of Diana and Hercules’ lawyer driving to his home to read his will that are an enormous waste of space, as well as a battle with parademons that reads like it was tacked on to add a bit of action to this otherwise lifeless issue. The whole thing felt like filler, as if Robinson knew he wanted to end this issue with the reveal of Jason and just threw a bunch of things together to fill up the nineteen pages before that. We get slightly more information on the dead gods, I suppose, but it’s nothing that we didn’t already know from Grail in the last issue.

The art didn’t help matters, either. Sergio Davila’s pencils, with inks from Scott Hanna and Mark Morales, were generic superhero fodder. I didn’t find much in the way of a unique style or artistic flair. It was standard cape comic art, and not particularly strong art at that. It wasn’t terrible by any means, but there was nothing interesting about it. It was serviceable at best. Though I did like how Davila drew Diana’s hair later in the issue in a sort of up-do thing with her tiara perched higher up. That was kind of a cool look. I’m always down for a creative use of the tiara.

There were also two story choices that rubbed me the wrong way as a Wonder Woman fan. First was the depiction of Hercules. Back in the 1940s, Hercules was a villain. His betrayal and imprisonment of the Amazons is what led Hippolyta to leave the world of men and take her warriors to Paradise Island to live in an all-female utopia. For William Moulton Marston, Hercules represented the worst of men’s aggression and dominance, and most incarnations of the character have followed suit. We don’t know what, if any, role Hercules played in this modern version of the Amazons; all of the New 52 stuff is up in the air after “The Lies” and “The Truth,” and our knowledge of the true Amazons is limited. But introducing Hercules as a dude who’s done some good stuff and some bad stuff, and who admired Diana, largely ignores what he’s represented in past incarnations of Wonder Woman. I don’t hate that he’s sorry for his past mistakes, since it’s always good to show how people can change. It’s more that Hercules carries a lot of baggage in terms of the history of the Amazons, and his depiction in this arc doesn’t acknowledge this in the least. He’s kind of a loaded character, and they’ve ignored that entirely.

Second, this issue introduces the Oddfellows, Steve’s tactical team that is comprised of modern versions of his associated from the Wonder Woman movie. We’ve got Sameer, Charlie, and Chief, all written much like their film counterparts, just jumped ahead a century and given some heavier artillery. This annoyed me, in part because this arc has been so bad thus far that I hate to see these characters that I quite enjoyed on the big screen put to such poor use here. I also found it very telling that the creative team borrowed a bunch of the fellows from the Wonder Woman film, and yet Etta Candy has been absent from both issues of this new arc. I mean, come on now.

So, I did not particularly care for this issue, and I am not enjoying the specter of five more months of this that lies ahead. It all feels fundamentally flawed across the board, like the creative team and the editors just don’t understand what a Wonder Woman comic should be. We’re only two in, of course, and it may well pick up eventually. But thus far, this arc has done nothing but confirm all of my worst fears from when the storyline was first announced.