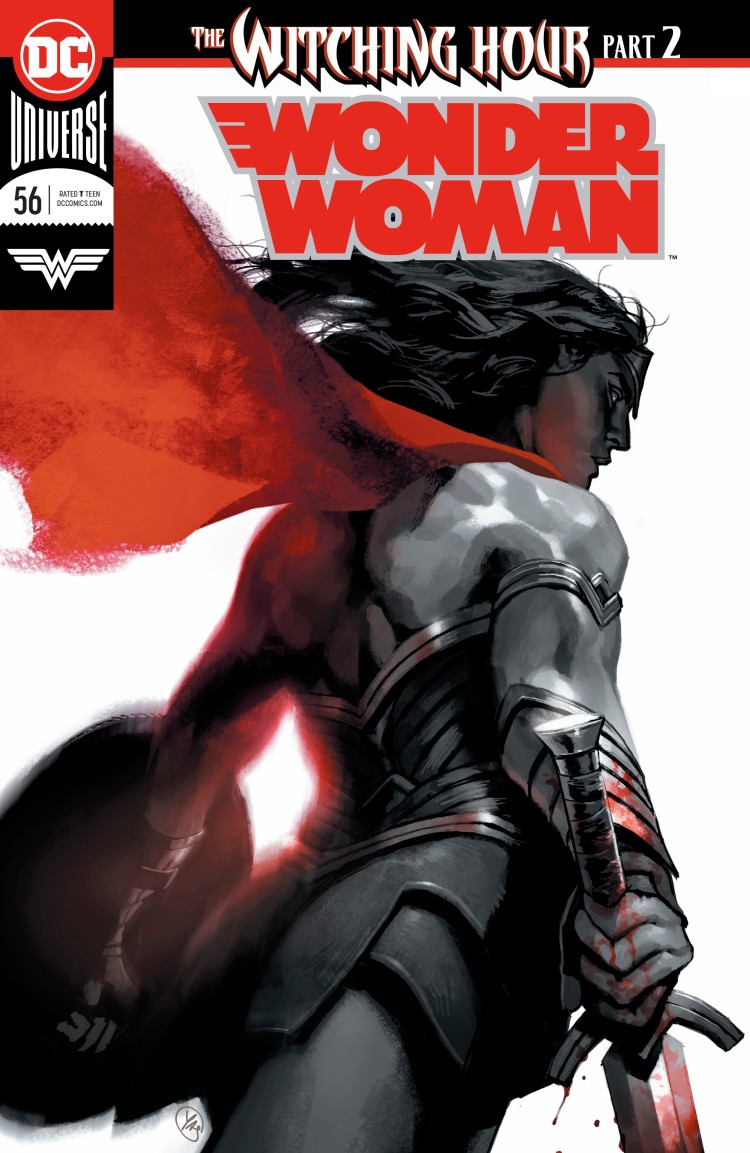 In Wonder Woman #56, we get Emanuela Lupacchino drawing Wonder Woman, Zatanna, AND Circe, and if that’s not worth four bucks then I don’t know what is. Luppachino’s drawn a bunch of issues of Wonder Woman over the past year, bringing some visual flair to several subpar stories, but this time she’s paired with writing worthy of her talents. James Tynion IV is putting together something cool here with “The Witching Hour” and I’m really enjoying it. The crossover is the perfect October treat thus far, and the stakes keep getting higher. Our pal Wonder Woman is playing with some dangerous powers here, and I’m worried that things might go sideways on her. We’ll get into it all, but first:

Look away if you haven’t read this issue yet!

Also, you should buy this issue! And the other parts of the crossover!

I’m going to start by talking about a small, almost inconsequential part of the book, but it’s something done smoothly and well in a way that deserves recognition. Continuity is in a tricky spot right now in the DC universe. The New 52 relaunch was rocky, and the “Rebirth” books did some good course correction but confusion still remains. This is true most of all for Wonder Woman. Her continuity right now is a dang mess. Elements I thought were changed and sorted keep coming back, and parts of her past remain massive questions marks. It’s chaos.

But sometimes, there’s a simple fix to a problem. Case in point: Circe. In the New 52 era, she appeared in the deservedly maligned Superman/Wonder Woman series in classic scary witch form, wreaking all sorts of havoc. But in the “Rebirth” era, Bilquis Evely did a marvelous redesign of the character that modernized her for Greg Rucka’s more nuanced take. These contrary incarnations both exist in the same universe, so Tynion found an easy workaround. He brought out the first Circe, all pigtailed and black bodiced, to intimidate Wonder Woman and her friends, then when she realized what was happening she morphed into the newer, chiller Circe, explaining that the first look was just for theatrics. It’s an elegant way to clean up a continuity snafu, all while adding a little drama and humour to the story.

Speaking of humour, I really enjoyed the balance of the serious and the silly in this issue. Terrible things are happening for Wonder Woman and the gang, with our Amazon heroine plagued with a powerful curse and Hecate set to destroy all magic, violently and brutally. It’s a bad scene. But the book doesn’t languish in tense planning and argument. There’s a lot of that, sure. Wonder Woman’s got kind of a whacky plan here. But there are enough small, humorous moments to keep everything from feeling too heavy. Detective Chimp is always great comic relief, and it turns out Man-Bat is a good source for some unexpected laughs too. The tone is well managed throughout, maintaining the tension while not drowning in it.

Tynion’s done a nice job crafting an impossible situation, too. Wonder Woman and Zatanna’s argument over what to do in the face of the overwhelmingly powerful Hecate was so well done. It’s hard to craft an argument where both sides have totally valid points, but while reading this I kept flip flopping back and forth over whose side I was on. Diana wants to wield Hecate’s power with Circe’s help, tapping into it without being controlled by it. Zatanna thinks that channeling the power would be impossible and that Wonder Woman would slip under Hecate’s control again. And they’re both right! There’s no other power strong enough to challenge Hecate but her own, but it’s also a power that Hecate can control. It could work, but it could also go terribly awry. It’s also an argument that doesn’t get personal. This isn’t about trust. Zatanna doesn’t think that Diana is weak and Diana doesn’t think that Zatanna is cowardly. They’re facing an awesome power, and they just have different ideas and concerns.

In the end, Wonder Woman goes for it, of course. We’ve been seeing a lot of stories lately about Wonder Woman going above and beyond, taking on the weight of the world because she’s confident she can bear it. It’s a compelling theme, and one that’s especially apt in today’s political climate. And the fact remains that everyone has limits. There’s no one I would rather have try to wield Hecate’s power than Diana, but at the same time, that power is immense. Even Diana might not be able to keep control of it. Watching this all play out has made for great reading thus far, and I’m excited to see where it goes from here now that she’s taken this next step.

As I mentioned at the top, Emanuela Lupacchino drew this issue, with inks from Ray McCarthy, and I am always glad to have her in the pages of Wonder Woman. She’s got such an ease with the character, capturing her power and beauty with aplomb in every panel. It was fun to see her draw some other DC mainstays as well. Lupacchino’s got a knack for female characters, so Zatanna and Circe were super cool, but the rest of the gang were nicely done as well. She captured the growing tension of the issue, while also nailing the smaller comedic moments. And she was joined by colorist Romulo Fajardo Jr., who always brings the heat. I know I go on and on about him all the time, but seriously, flip through this comic book. Look at the textures and the colour choices and see how everything beautifully compliments the line art. The dude is so good.

“The Witching Hour” continues next week in Justice League Dark, so be sure to let your local comic book shop know you’re on board for the entire crossover. These first two issues have been really good, and I think the whole event will be worth picking up. It’s spooky and enjoyable and I honestly have no idea how they’re going to win this one, which is the sign of an excellent story.

One thought on “Wonder Woman #56 Review: The Witching Hour Continues!”