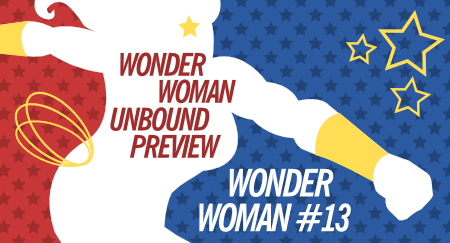 Every Monday until Wonder Woman Unbound: The Curious History of the World’s Most Famous Heroine comes out this April, we’re taking a look at a comic panel that captures a key moment in Wonder Woman’s history and highlights an important point from each chapter.

Wonder Woman was a hero far ahead of her time, advocating for the strength and superiority of women.  The utopian Paradise Island showcased the benefits of matriarchal rule, but William Moulton Marston chose an unusual metaphor; the most common activity on Paradise Island was bondage games, like in this panel from Wonder Woman #13:

Bondage imagery made up a significant portion of Wonder Woman’s Golden Age comic books, and it had a specific purpose.  On Paradise Island, being controlled by women was a fun, pleasant activity.  Everyone in the panel above is clearly having a good time.  But out in the world of men, bondage became a harsh critique of patriarchy.  Being controlled by a man was always unpleasant and oppressive for Wonder Woman and her friends.

This bondage metaphor, while odd for a children’s comic, holds up in theory.  In practice, however, there were certain fixations in Marston’s employment of the metaphor that complicated the message.  The feminism was wrapped up in a fetishism that occasionally took a dark turn and clouded Wonder Woman’s progressive aims.

To read more, you’ll have to wait until Wonder Woman Unbound comes out this April!  Be sure to come back next Monday, when we’ll look at some Wonder Women, plural, and also check out the third installment of my interview series this Wednesday; we’ll be talking with Janelle Asselin!

Wonder Unbound Unbound is available for pre-order now, online or at your local comic shop.