The Silver Age was a whacky, fantastical time.  The campy adventures brought about by the impressively strict Comics Code Authority in 1954 removed any lingering World War Two era grittiness from superhero comics.  Thus, Lois Lane often encountered new technologies that made her severely overweight or gave her the head of a cat, while Batman sported all manner of new costumes, including zebra and rainbow models.  It was a silly time.

Kanigher, the writer of Wonder Woman throughout the entire Silver Age, totally embodied the vibe of this period.  He relished Wonder Woman’s mythological origins, and came up with all manner of bizarre beasts for her to battle.  Kanigher tried to mix it up, with cannibal clams and sphinx creatures and the like, but his favourite go-to foe was the giant bird.  I have no idea why, but he went back to the giant bird well over and over and over.

Nothing better encapsulates the essence of Silver Age Wonder Woman stories than the fact that Wonder Woman had to battle six specifically different types of giant birds in a twenty issue span.  It was giant birds ALL the time, and I’ll enumerate them now for your infotainment:

Wonder Woman and Steve get trapped in a creepy amusement park fun house, where a dastardly villain transports them to a world full of dinosaurs.  Right away, a giant pterodactyl is all over them, and of course a spectacular battle ensues (their escape involves lassoing a flaming meteor).

Wonder Woman #105: The Eagle of Space

Steve is sent on a space mission in a new rocket ship, but gets ensnared of the beak of the massive eagle of space.  The bird is from Saturn’s moon, Titan, and flew to Earth on cosmic jet streams… Titan even has cave people, but then Wonder Woman totally violates the Prime Directive and telepathically teaches them all about Earth technology.

A roc is a giant mythical bird, and here it has interrupted Wonder Girl’s birthday party and stolen her cake.  Obviously that’s not cool at all, so Wonder Girl sets off after the roc, but ultimately the giant bird drops the cake into the ocean where it’s eaten by a whale.

Wonder Woman is attending a parade, when all of a sudden the giant balloon floats come to life.  Among the floats is this giant, spotted bird who comes after the invisible plane, but Wonder Woman cleverly dives into a gorge and the balloon bird scrapes along its rocky sides and pops. 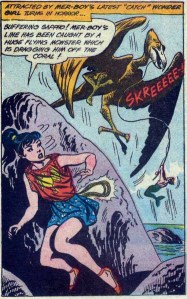 What this creature lacks in naming specificity it makes up for in danger!!  Mer-Boy is trying to win a fishing contest so he can give the prize to Wonder Girl (though I don’t know why mer-people would engage in a fishing contest… that seems like a catastrophe in the making), but his over-enthusiastic cast snares a huge flying monster.  Luckily, Wonder Girl was nearby and rescued him.

Mer-Boy has the worst luck with giant birds.  He and Wonder Girl had just swam through a time portal in a sunken ship and ended up in the age of the dinosaurs, and right away the poor dude was snatched up.  He really needs to learn to stay under the sea.  Wonder Girl again saves him, and the Hippolyta leads the Amazons in an epic space battle… it’s a weird (but AWESOME) issue.

What is most impressive about these six giant birds in twenty issues is that I’m only counting the times a NEW type of giant bird is mentioned.  There are several OTHER rocs and pterodactyls throughout this span… I’m only pointing out one instance of each sort of giant bird!!  Kanigher was completely out of hand with his use of massive avian foes, but this abundance of colossal winged enemies perfectly captures the wall-to-wall ridiculousness of the Silver Age.  It may not have been the best of eras, qualitywise, but it was certainly lots of fun.

One thought on “A Book Look: Kanigher’s Giant Birds”