May is going to be another busy month for Wonder Woman, and will mark the end of her two mainline series. Wonder Woman is set to relaunch in June with a new #1 issue, while Superman/Wonder Woman will be done forever, thank goodness; that book never even got close to decent, despite three years of trying. But that’s June. In May, both series are wrapping up, plus Wonder Woman’s got a few other things in the mix, including a very cool surprise. Let’s take a look at what she’ll be up to in May, starting with Wonder Woman #52 and its two covers:

WONDER WOMAN #52
Written by MEREDITH FINCH
Art by MIGUEL MENDOÇA
Cover by YANICK PAQUETTE
Variant cover by DAVID FINCH and MATT BANNING
On sale MAY 18 • 32 pg, FC, $3.99 US • RATED T
Hecate’s true motivations are revealed and Wonder Woman’s dream of a happy ending is called into question by the Amazon warrior herself. You can’t afford to miss the epic conclusion of the quest to save baby Zeke and the Olympians.

While we don’t have official confirmation on the new Wonder Woman creative team, all signs point to this being the last issue for Meredith and David Finch. And there was much rejoicing throughout the land. Their final outing wraps up the storyline of Zeke’s illness, and it sounds like Hecate might be up to no good. Really? The creepy looking witch goddess with the spikes coming out her head doesn’t have the purest of intentions? I did not see that coming (I actually did, in my review of the start of this arc last week. I think I was sarcastic about her then, too. That sounds like me).

Anyway, the Finches will be done and maybe the series will be good for a change from now on. Here’s hoping! 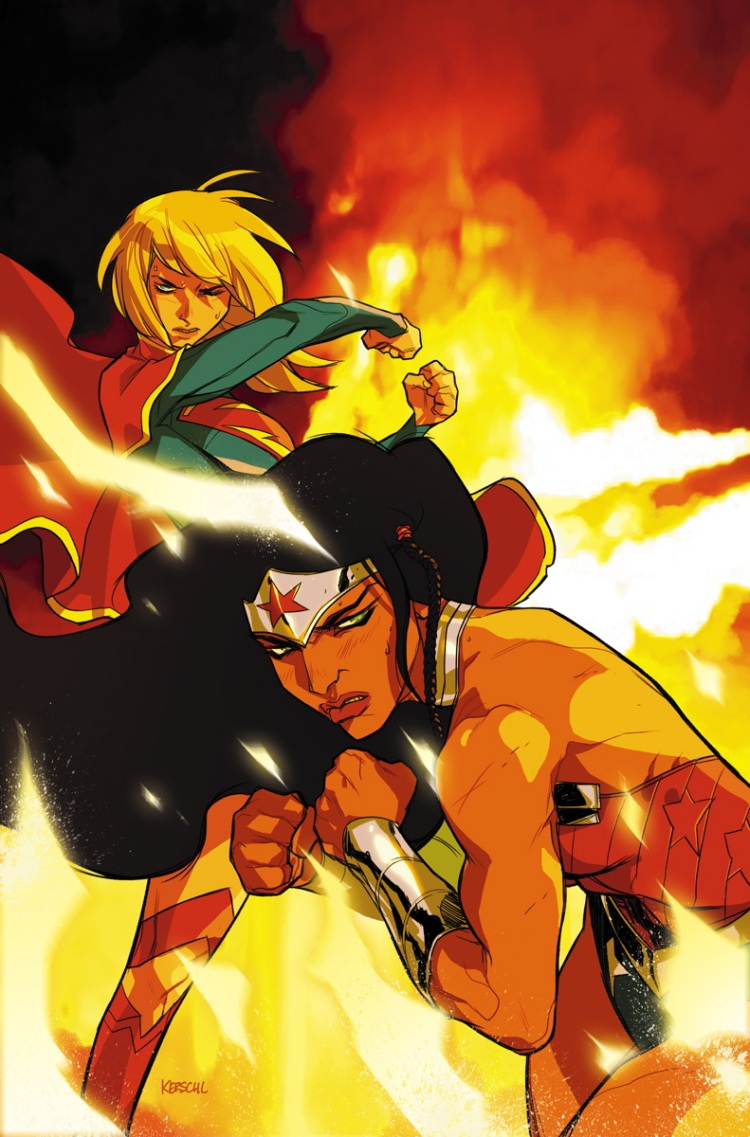 SUPERMAN/WONDER WOMAN #29
Written by PETER J. TOMASI
Art by DOUG MAHNKE and JAIME MENDOZA
Cover by KARL KERSCHL
On sale MAY 18 • 32 pg, FC, $3.99 US • RATED T
It’s the penultimate chapter of “Super League”! When all the Supermen have fallen, it’s Supergirl to the rescue! But can Kara and Wonder Woman stop a villain who wants to end Clark’s hope for future Supermen?

This is a whole big crossover scene with all of the other Super-books, and seeing as I don’t buy any of those than I’m guessing this issue won’t make a lick of sense to me. But it’s a Wonder Woman/Supergirl team-up, and that could be fun. Plus a Karl Kerschl cover! This issue has some stuff going for it, certainly. Though it also sounds like a fitting end to this series that has consistently focused on Superman over Wonder Woman, with a Super-crossover that’s yet again all about the Man of Steel.

We’ve also got a double shipping Legend of Wonder Woman in May: 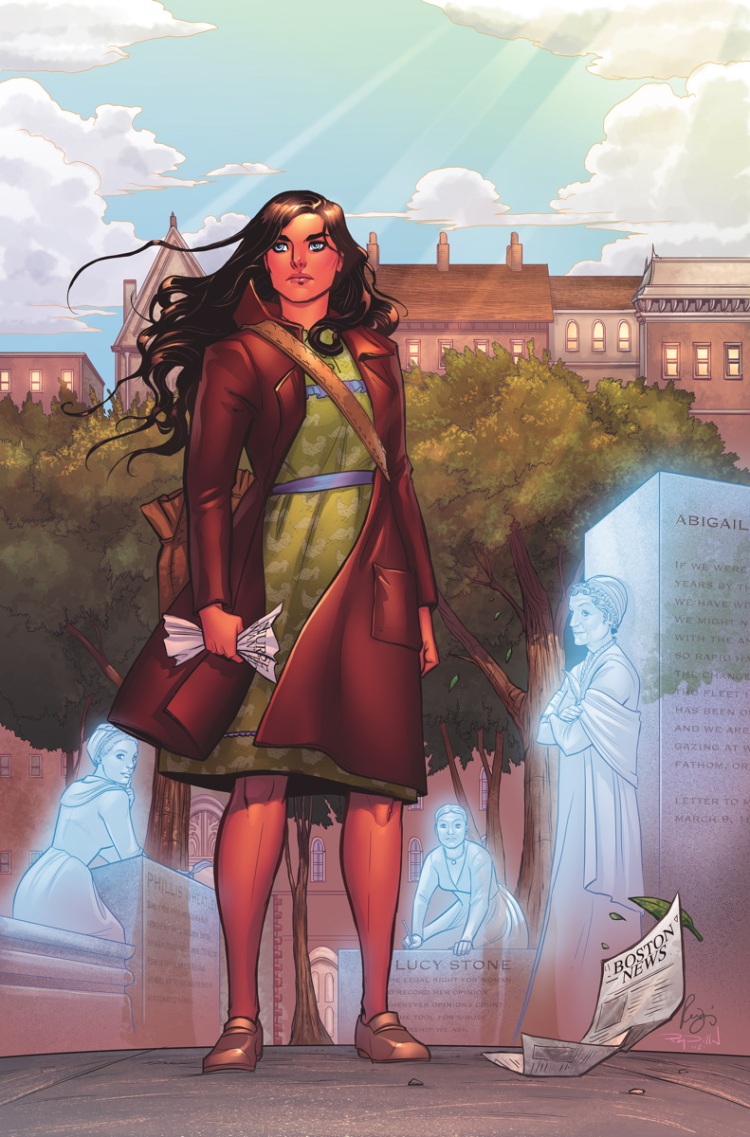 THE LEGEND OF WONDER WOMAN #5
Written by RENAE DE LIZ
Art by RENAE DE LIZ and RAY DILLON
Cover by RENAE DE LIZ
On sale MAY 4 • 40 pg, FC, 5 of 9, $3.99 US • RATED T • DIGITAL FIRST
Double shipping in May! In issue #5, the Holliday Girls are off to Boston! But while the girls go shopping, Etta and Diana have more dangerous errands to run. Diana visits the newspaper that published tales of the Duke of Deception…and discovers a new mission—perhaps she can save Themyscira by saving the people of Man’s World from him!

THE LEGEND OF WONDER WOMAN #6
Written by RENAE DE LIZ
Art by RENAE DE LIZ and RAY DILLON
Cover by RENAE DE LIZ
On sale MAY 18 • 40 pg, FC, 6 of 9, $3.99 US • RATED T • DIGITAL FIRST
Double shipping in May! There’s a war devastating the outside world, and while Diana tries not to care, she cannot help but want to protect the many who are suffering. As she finally confronts the Duke of Deception and his minions, she must decide whether to chase her answers of home, or use her new strengths to defend the outsiders.

Double the shipping, double the fun! Two issues of the Legend of Wonder Woman sounds like a good deal to me. This book is so good, I’d gladly pay for it twice in one month. It’s the best Wonder Woman comic in years, by a considerable margin. We’ve seen the contents of the fifth issue already in digital form, and it’s super good; Diana and Etta hijinks are the best. And the next issue will finally have Diana going off to the war to battle the Duke of Deception, which should be an excellent time. It’s the best comic, gang. Buy it!

This sounds SO cool. Wonder Woman art by her classic artists will be so much fun to color, plus the book is 96 pages long! That’s a lot of coloring bang for your buck. I’m excited to see what pages and covers they include in the book, and I’m definitely going to pick this one up.

The solicits also listed several new Wonder Woman figures. We’ve discussed most of them before elsewhere on the site, but here are the details of when you can get them:

Look for all of the comics in May, the coloring book in June, and the figures in September. Also, maybe start saving your pennies now because that’s a lot of things to buy!

One thought on “Wonder Woman’s May 2016 Covers and Solicits”